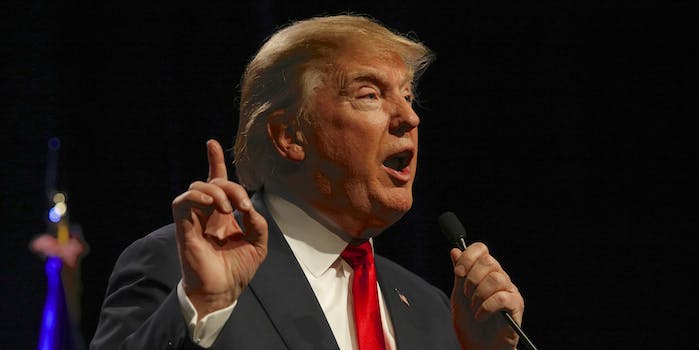 There are 2.2 million apps—and Trump’s iPhone has just 1

You'll never guess what it could be.

President Donald Trump has only one app on his iPhone, and you can probably guess what it is.

The news site Axios reported Thursday that Twitter is the only application found on the president’s iPhone that doesn’t come pre-installed on iOS. This shouldn’t be a surprise—Trump’s love for Twitter is as clear as his attitude toward the media.

It is a bit odd that someone would buy an iPhone and use only one of its 2.2 million apps. Then again, Trump isn’t the most tech-savvy person to have worked out of the Oval Office. He doesn’t use a computer and chooses to hand-write messages instead of emailing them.

“I think the computers have complicated lives very greatly. The whole, you know, age of computer has made it where nobody knows exactly what’s going on,” Trump told reporters in December. “We have speed and we have a lot of other things, but I’m not sure you have the kind of security you need.”

During the early days of his presidency, Trump tweeted from a Samsung Galaxy S3, a phone that hadn’t received a security update in years. He has since switched to an iPhone, which he only uses in the evenings.

“During the day, I’m in the office, I just shout it out to one of the young ladies who are tremendous… I’ll just shout it out, and they’ll do it,” Trump told Anderson Cooper last year. “But during the evenings, after 7 o’clock or so, I will always do it by myself.”

Every one of Trump’s tweets becomes a point of contention the moment it gets posted. Some have gotten him into trouble, something his staff is working hard to prevent.

“Trump himself has been pushing staff to give him more free time,” writes Axion reporter Mike Allen. “But staff does everything it can to load up his schedule to keep him from getting worked up watching cable coverage, which often precipitates his tweets. It has worked well overseas so far.”

Perhaps they should consider downloading a few more apps to keep him from firing off rants 140 characters at a time.