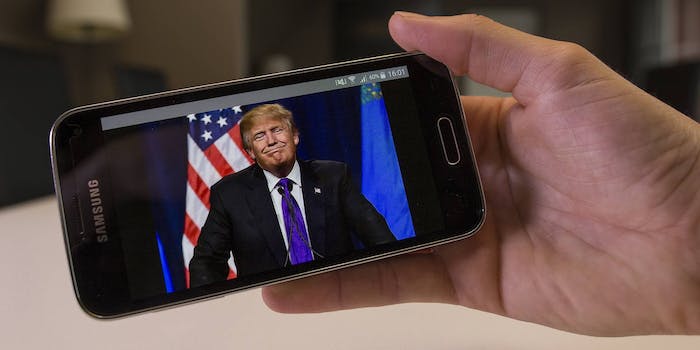 Sometimes it's better to be secure than to be smart.

Earlier this week, President Donald Trump was forced to hand over his Twitter-famous Samsung Galaxy smartphone for a “secure, encrypted device approved by the Secret Service with a new number that few people possess,” according to a report from the New York Times.

It’s now tradition for the incoming president to give up their personal smartphone for something a bit more protected, one that gives POTUS a very limited number of people to contact.

If Trump wants to continue his tweetstorms, he’ll have to use a separate device. Obama, the country’s first smartphone-equipped president, had a special phone to conduct tweets from. He didn’t do it often but made sure to run every message by his staff before pressing send, according to the Associated Press.

Obama started in the White House with a Blackberry before switching to an unknown government-optimized smartphone just last year. Back in June, the former president appeared on The Tonight Show with Jimmy Fallon and likened his new device to a play phone for a 3-year-old.

He said his staff told him, “For security reasons—this is a great phone, state-of-the-art—but it doesn’t take pictures, you can’t text, the phone doesn’t work, you can’t play your music on it.”

We’re sure Trump will find another way to tweet, even with the new security measures. The real question is the frequency and tone he will take on his fancy new @POTUS account. We probably won’t have to wait long to find out.