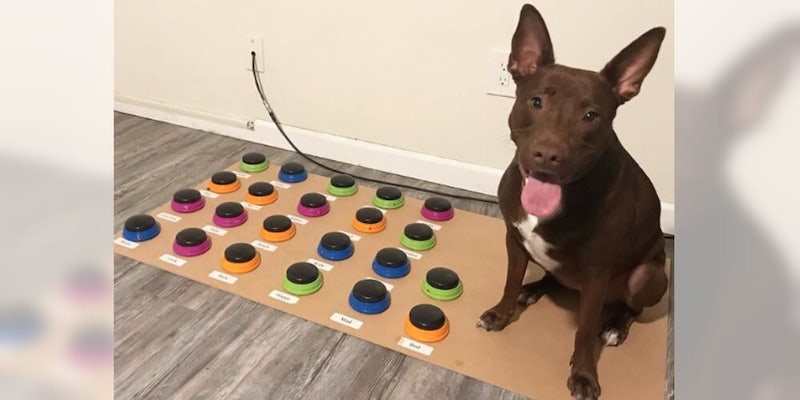 This dog can talk with a custom soundboard

A speech pathologist created a device to communicate with her dog.

Do you ever wish your dog could talk to you? Speech pathologist Christina Hunger created the technology to have her dog do just that.

The device is normally used to help low or nonverbal people communicate. Voice Output Communication Aids work by producing recorded or digitized speech in response to keyboard input. For example, a user will select what they want to say by selecting a button on the keyboard, and that will tell a caregiver what they want or need.

Stella’s device is similar in concept.

But because Stella is a dog and not a human, her board is naturally very different from the ones used by humans–both physically and in what the buttons are designed to let her express. As well as being much larger, the board is laid out on the floor with large buttons designed to be pushed by Stella’s paws. Her buttons include both her own and her two humans’ names, as well as objects and activities like walk, food, ball, and nap. There are also a couple of basic emotional estates, like happy, featured on Stella’s device.

Meet Stella! Stella is a spunky Catahoula / Blue Heeler mix. She has been learning to talk since she was two months old! Now, she has lots to say and is the best girl in every way.

Stella started learning to use the board when she was only 2 months old, according to Hunger’s Instagram account. But as she got older, she started communicating in more complex ways.

She can now use up to five words together to form a complete sentence and attempts to use the board to communicate when she’s worried or sad.

“Today when she heard some noises outside and wanted to go investigate, I told her we were staying inside,” Hunger wrote on Instagram, along with a video of Stella using the device. “Stella responded by saying, ‘Look’ 9 TIMES IN A ROW, then ‘Come outside.'”

Stella’s level of communication is reportedly equal to that of a 2-year-old human child.

Hunger believes that most dogs can learn to talk to humans in the same way. She has instructions on how to get started posted on her website if you want to learn how to communicate with your dog as well.

The Daily Dot has reached out to Christina Hunger.