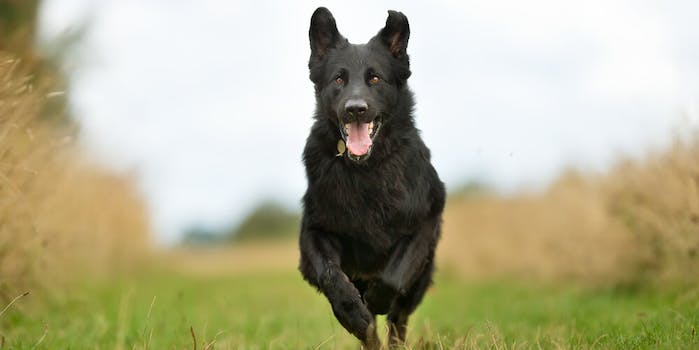 Here’s why people are sharing photos of their black dogs

As well as being the start of Halloween month, October 1 is also National Black Dog Day. Like their feline brethren, black dogs are the least likely to be adopted out of shelters due to a combination of people believing that black animals are unlucky and unfriendly, and their supposedly unphotogenic nature. Known as Black Dog Syndrome, the bias is likely to be an unconscious one for many people, as even those who wouldn’t say they believed or cared about any of those things are more likely to choose light-colored dogs over black ones.

.#rescuers know there's a (superstitious) prejudice against adopting black dogs & cats. Ur missing out on some of the greatest family members of ur life. This was my Wiley, the most loving, wisest old soul I ever knew. Black dogs & cats rule! #NationalBlackDogDay #tailsofjoy pic.twitter.com/z6c3uUrvz6

Founded in 2011, National Black Dog Day is an attempt to overcome this ridiculous stigma and help some very good doggos find the homes they deserve.

Meet Chip (444019)! This sweetie has been in and out of our care since July 2018. He LOVES humans. He would like a cuddle buddy who will give him lots of attention each day. He is house trained, silly and playful, and Chip would be happiest as your only pet. #NationalBlackDogDay pic.twitter.com/jZkCHOQ9oJ

Did you know that black dogs can take longer to find their Forever Homes? Also, in puppy litters of varying colours, lighter coloured puppies are often booked for adoption first! #NationalBlackDogDay 🐾 pic.twitter.com/21m7XOmaAc

Did you know black dogs are less likely to be adopted for no other reason than the color of their fur? Odd, when considering these dogs make just as good companions. #NationalBlackDogDayhttps://t.co/l5kAmFm1Jr pic.twitter.com/dKmI6XQqpN

and here's another – he's brought so much joy to my life since we adopted him from @DogsTrust – this was taken the day we brought him home #NationalBlackDogDay pic.twitter.com/fHsoH7qhNA

As it's #NationalBlackDogDay here's our old, blind, a bit stinky, but much loved Mavis.. pic.twitter.com/KH3vwe52zI

Including the Greensboro Grasshoppers, who shared a picture of one of their mascot dogs, Lou Lou Gehrig. The mascot dogs help return bats and balls during games.

Happy #NationalBlackDogDay 🙂 As you can clearly see my friend, Maggie, & I are black dogs. We feel blest that we are so loved. However, darker shades of dogs r often overlooked & less likely to be adopted 4 no other reason than their coloring. Today is a day to honor blk dogs. pic.twitter.com/VKmBdyM8F5

And after seeing all of these lovely boys and girls, how could you not be convinced? Black dogs forever.

In honor of #NationalBlackDogDay, here is my handsome pug Rudy. pic.twitter.com/W57gDArAP7