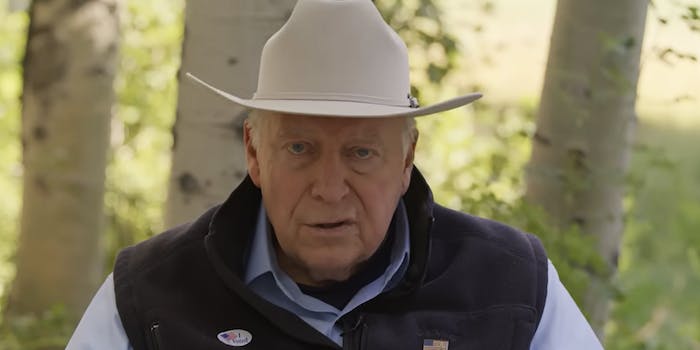 ‘He is a coward’: Dick Cheney’s anti-Trump video sparks debate

'Dick Cheney is a war criminal.'

A new political ad in which former Vice President Dick Cheney condemns former President Donald Trump has divided the internet, spurring a wide-range of reactions from across the aisle.

The ad, released on Thursday by Cheney’s daughter Rep. Liz Cheney (R-WY), shows the former vice president labeling Trump as the greatest threat to the country. Liz is running for reelection but appears to be trailing attorney Harriet Hageman in the GOP primary race.

“In our nation’s 246-year history, there has never been an individual who is a greater threat to our republic than Donald Trump,” Dick says. “He tried to steal the last election using lies and violence to keep himself in power after the voters had rejected him. He is a coward. A real man wouldn’t lie to his supporters.”

While Dick was once adored by Republicans, modern conservatives have long since turned against the former political heavyweight. Liz is also widely disliked among Trump supporters, especially given her role as vice chairwoman of the Jan. 6 select committee investigating Trump’s role in the Capitol riot.

Liz’s tweet of the video has now been viewed well over 6.5 million times, racking up nearly 27,000 retweets in the process. Yet supporters of Trump were less than impressed.

Conservative pundit Benny Johnson referred to Dick as a “war criminal” given his role in cheerleading the invasion of Iraq following the 9/11 terror attack.

Conservative combat veterans held similar views, accusing the former vice president of being not only a war criminal but a murderer as well.

“Dick Cheney sent me, and others, to a foreign country to knowingly kill innocent people,” another Twitter user wrote. “He’s a war criminal and a murderer!”

But it wasn’t just Trump supporters who had choice words for Dick. Many progressives also condemned the former vice president over his laundry list of political scandals.

Left-wing journalist David Sirota tore into Dick’s record as well in a scathing tweet that accused the former vice president of stealing a national election.

“[M]ight be a more effective message coming from someone who did not steal a national election, then set off a climate bomb, then lie the country into a war that killed a million people, and then oversaw dereg that created a financial crisis destroying the global economy,” he said.

“Dick Cheney wants you to know that stealing elections is bad,” popular writer @JordanUhl added, referring to the election between Bush and Al Gore in 2000.

Not everyone viewed the ad with complete disdain, however. Many progressives also praised Cheney, some only begrudgingly, given their dislike of Trump.

“When I worked for US Senator Ben Nighthorse Campbell as a Senate Aide, I met Dick Cheney when he was a VP,” she wrote. “I disagreed with him on many issues, especially Iraq, however I have to give him lots of kudos for standing up on this.”

It remains unclear how successful Dick’s message will be in helping his daughter retain her political power. Given that the majority of conservatives back Trump, the ad could also signal just how out-of-touch Liz has become with her own party.