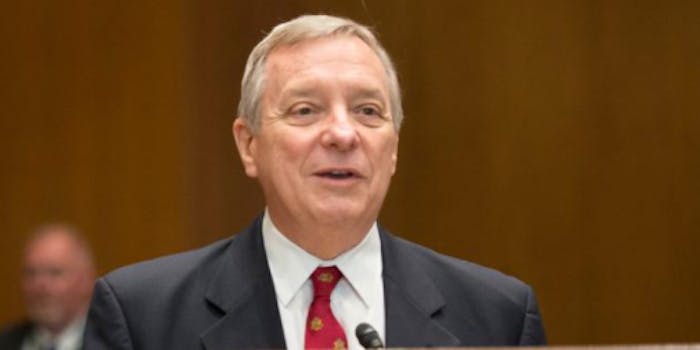 Sen. Minority Whip Dick Durbin, Bernie Sanders, and others think we need to amend the Constitution.

The second highest Democrat in the Senate on Tuesday joined others in his party in calling for an end to the Electoral College.

Sen. Minority Whip Dick Durbin (D-Ill.) called the Electoral College “a shameful relic” on Twitter, a day after electors around the country gathered to ratify President-Elect Donald Trump‘s victory. Trump on Monday easily surpassed the 270 votes he needed to win the presidency despite a nearly month-long campaign on social media and by so-called “faithless electors” to get the Electoral College to rally against him.

Durbin tweeted out a link to an op-ed by the editorial board of the New York Times on Tuesday morning that called for an end to the institution and linked the creation of the Electoral College to slavery. He also reminded his followers that he introduced a bill to abolish the Electoral College in 2000.

As @nytopinion states, the Electoral College “is a living symbol of America’s original sin”, created when slavery was the law of the land

A relic from a shameful period in our nation’s history, the Electoral College allows some votes to carry greater weight than others

You'd say that is fundamentally unfair, that we live in a nation that's 1 person, 1 vote–but that's exactly what the Electoral College does

Calls to abolish the Electoral College have not been taken seriously in the past, but many argue that Trump’s loss of the popular vote to Democrat Hillary Clinton by nearly 3 million votes—the largest losing margin in history for a winner of the electoral vote—means the system mandated by the U.S. Constitution has outdated its usefulness. As the Times calculated, a Wyoming resident’s vote counts 3.6 times as much as a Californian’s vote under the Electoral College system because it weighs the votes of less populous states more heavily, a fact that has become more apparent due to the disparate rate of population growth across the nation.

For example, according to U.S. Census estimates, Wyoming’s population grew from 290,000 people in 1950 to nearly double that amount in 2016-the state currently has a population of 585, 501  people. California’s population has nearly quadrupled in that time–from 10.68 million residents in 1950 to 38.8 million residents in 2016. During that same time period, California has grown from 25 Electoral College votes to more than double–a total of 55 in 2016.

Wyoming’s number of votes in the Electoral College over the past six decades has remained the same; a total of three.

But abolishing the Electoral College would require a constitutional amendment–which even in the age of Trump is politically unfeasible. Passing a constitutional amendment would require approval by a two-thirds majority vote in both the House of Representatives and the Senate and ratification by 38 of the 50 state legislatures. Given that state legislatures are disproportionately Republican and abolishing the Electoral College has been a notably Democratic issue since the 2000 election, such a scenario seems even more impossible than ever.

Unfortunately, amending the Constitution to eliminate this atavistic system is a practical impossibility for the same reason the Electoral College is a problem: The less populous states have a disproportionate share of voting power. Constitutional amendments require approval by three-quarters of the states, not a national majority or even super-majority of voters. Most states are currently Republican-dominated, and Republicans may believe at the moment that the peculiarities of the Electoral College will help to serve their partisan goals in future elections.

Durbin was joined by other key Democrats, including former presidential candidate Sen. Bernie Sanders (I-Vt) and Rep. Keith Ellison (D-Ill.), who is in the running for chair of the Democratic National Committee.

Trump received 2.5 million fewer votes than Clinton, yet he'll soon be president. Clearly, in a democratic society, this shouldn't happen.

We need to change the electoral college.

In reference to the electoral college vote today. Let us not forget this fact.