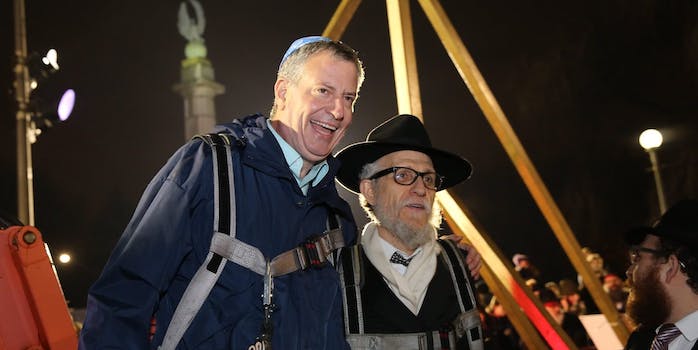 De Blasio's ire was specifically directed at yesterday's crowded funeral for a Hasidic Jewish rabbi who died of coronavirus.

In a Tuesday evening tweet directed at “the Jewish community, and all communities,” de Blasio said “the time for warnings has passed.” He said he’s told the New York Police Department to start issuing summons, possibly even arresting, people who disobey social distancing guidelines.

De Blasio’s ire was specifically directed at yesterday’s funeral for a Hasidic Jewish rabbi who died of coronavirus. According to photos circulating online, hundreds attended. Social distancing appears to have been largely ignored.

De Blasio earlier tweeted that he personally witnessed the gathering, which police ordered to disperse. “[W]hat I saw WILL NOT be tolerated so long as we are fighting the coronavirus,” he said.

Minutes after his initial warning, de Blasio presumably tried to partially soften the blow by tweeting that he understood “the instinct to gather to mourn.”

“But large gatherings will only lead to more deaths + more families in mourning,” he added, then reiterated that the NYPD would enforce a “zero tolerance” policy against people who gather in large groups.

The backlash was immediate. Many accused the mayor of anti-Semitism for singling out Jewish people. Some conservatives called de Blasio, a Democratic, a dictator.

They claimed that Hasidic Jews have been ignoring social distancing orders for weeks. A few among them urged de Blasio to be more careful about his word choice, however.

New York City is considered the national, potentially global, epicenter of coronavirus. The Hasidic Jewish community there has been reportedly disproportionately impacted by the virus.