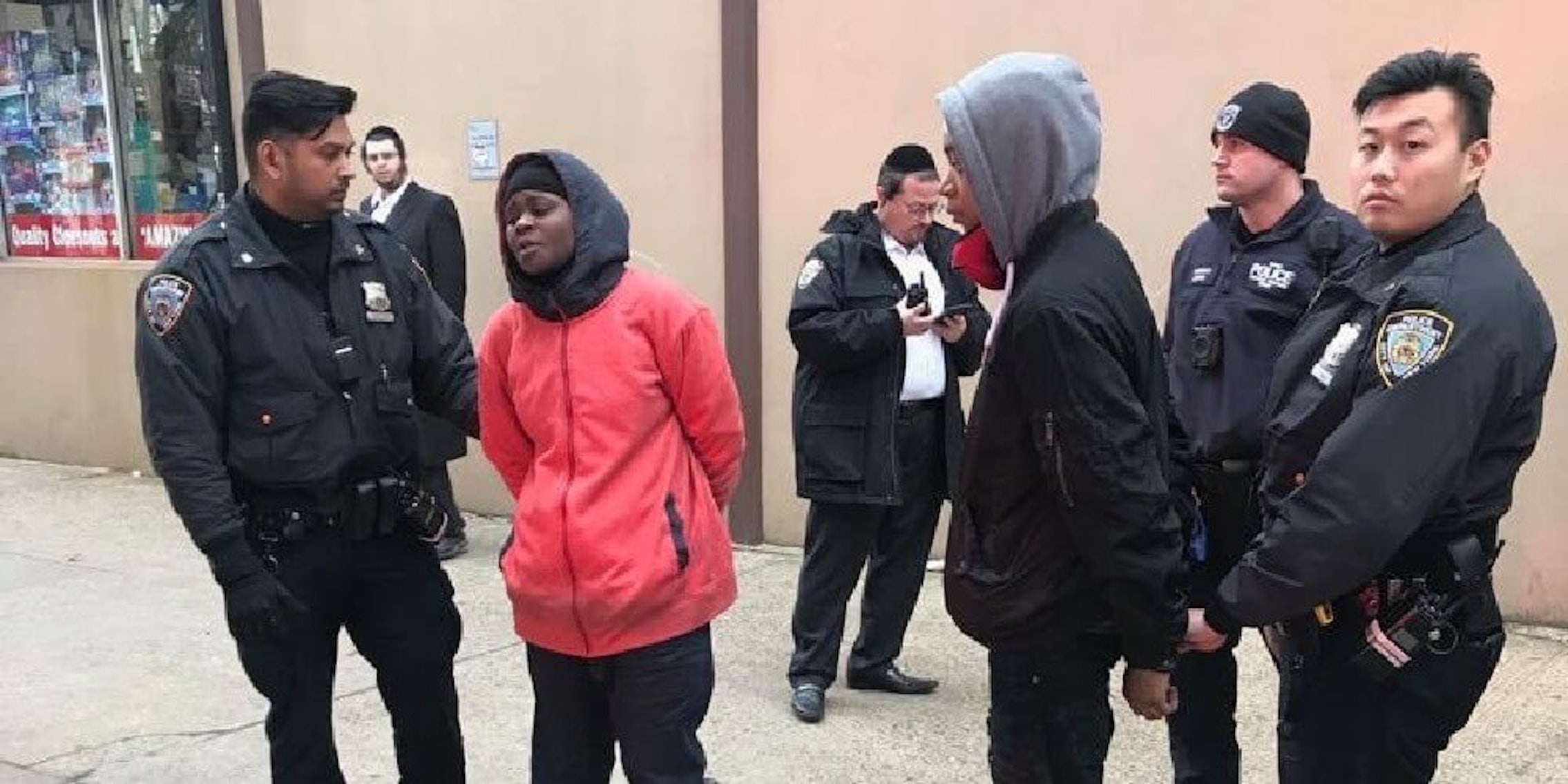 It's the latest in a string of anti-Semitic attacks.

Two women have reportedly been arrested after they shoved a Jewish man to the ground because he tried to record their anti-Semitic rant with his cellphone, according to multiple reports.

Witnesses and law enforcement said the women screamed threats at the man, including “fuck you, Jew” and “I will kill you Jews,” according to the New York Post.

According to witnesses who spoke to the Post, one woman started hurling abuses at the 22-year-old Hasidic Jewish man, and her friend snatched his phone and threw it on the ground. They allegedly threw the broken phone on the man’s face after pushing him to the ground.

The victim’s friend told news station WPIX that they were returning from the synagogue when the women started shouting, “we’re here to kill the Jews,” “you’re not meant to be here,” and other “cuss words.”

One of the women, 34-year-old Arugudo Jacinte, has been slapped with four charges including assault, and robbery, according to WPIX.

The incident took place a day after a Jewish teen in Brooklyn was robbed by two people who hurled anti-Semitic abuses while taking his earphones and his religious cap, according to another report by the Post. The attackers reportedly returned the 15-year-old’s belongings before they took off from the bus.

CCTV footage posted on Tuesday showed a group of men walking past a man in a Jewish cap in a Crown Heights neighborhood. One of the men hits the man’s cap, and it falls on the ground. The man seems to turn around and say something to the group, who then rush after him.

The @NYPD71Pct is looking for these suspects in another anti-semitic attack in the #CrownHeights section of #Brooklyn. pic.twitter.com/7Erz9krfSs

The incidents come amid a series of attacks that have put much of New York’s Jewish community on edge. Nine anti-Semitic attacks occurred in the week of Hanukkah alone.

Following the the stabbing inside the home of a rabbi in Monsey, New York, members of Jewish the community rallied at the Grand Army Plaza in Brooklyn on Sunday.

In response to the attacks, New York City Mayor Bill de Blasio on Sunday called for higher police presence and announced a “multi-ethnic interfaith Neighborhood Safety Coalition.” However, some members of the community feel that higher police presence won’t necessarily make all members feel safe; it would “only hurt and harm Black and brown communities,” Jason Rosenberg, who organized the rally at Grand Army Plaza, told the Daily Dot on Monday.

On Wednesday, De Blasio tweeted more messages of solidarity with the Jewish community and announced he will be present at another solidarity march organized for the coming Sunday.

NYPD immediately canvassed the area and took two individuals into custody. The investigation is ongoing by the Hate Crimes Task Force. People MUST be able to walk their own neighborhoods free from fear. pic.twitter.com/0v7LNdx8gA