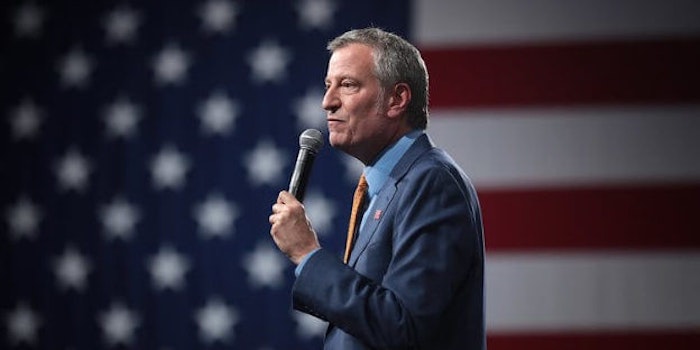 It blames him for attacks on police.

In less than a twelve-hour span this past weekend, there were two separate shooting attacks on New York Police Department officers. Now, an NYPD union blames New York City Mayor Bill de Blasio for the attacks and said it’s ready to start a war with him.

In the first incident, a man fired at police after asking them for directions and then fled the scene. Police say the same man later walked into a police precinct and started shooting. Two officers were wounded in the shootings. A third officer sustained unspecified injuries. The suspect, identified as Robert Williams, 45, then surrendered.

Public officials, including de Blasio, blamed protest groups that have demonstrated against increased police presence on the subway. There is thus far no evidence that Williams was involved with the protests. The mayor condemned the shootings on Twitter, which he called “an attack on ALL New Yorkers.”

On Sunday afternoon, the NYPD Sergeants Benevolent Association tweeted that it believes the attacks are the mayor’s fault and said that the NYPD is “declaring war” on him.

The union tweeted from its official account, “Mayor DeBlasio, the members of the NYPD are declaring war on you! We do not respect you, DO NOT visit us in hospitals. You sold the NYPD to the vile creatures, the 1% who hate cops but vote for you. NYPD cops have been assassinated because of you. This isn’t over, Game on!”

Mayor DeBlasio, the members of the NYPD are declaring war on you! We do not respect you, DO NOT visit us in hospitals. You sold the NYPD to the vile creatures, the 1% who hate cops but vote for you. NYPD cops have been assassinated because of you. This isn’t over, Game on! https://t.co/XyruPraM9T

The statement echoed President Donald Trump’s tweet from hours earlier, in which he blamed the “weak leadership” of Gov. Andrew Cuomo and de Blasio, both Democrats, for the attacks.

The union’s tweet quickly went viral, predictably stirring division as it did.

Right-wing social media personalities celebrated. One called for de Blasio and “the POS Dems to be jailed and removed for what they do to their cities.” Others opined that only people who unconditionally support police deserve its protection.

People on the other side of the growing political divide were appalled. Many were alarmed by the prospect of whoever runs the union account—it’s not clear who does—being armed and legally authorized to shoot people.

“Good to know the police don’t overreact to the slightest [perceived] slight against them,” is a representative response.

Some wondered if the union was essentially saying that it plans to assassinate the mayor.

As of late Monday morning, arguments continued playing out in the comments.

Does declaring war mean members of NYPD are planning to assassinate the mayor?

Well, I'm sure that the people who believe in the Second Amendment will defend against oh wait, they're on the side of police shooting people (who aren't Trumpers, of course)

Exactly! It would be nice if the police had a database of who not to respond to.. If our leaders truly were the fascists these liberal kooks claim this is exactly what would happen.

Even the argument with them "having families to go home to", is stupid. Their job is to make sure me, the citizen, gets home safe. They took that risk to become a police officer and potentially not making it home.

The I pay their wages line. That never gets old. Usually heard after saying the reason I pulled you over. The next line is usually don’t you have some real criminals to go after. Rank and file officers usually support gun rights.Blame the pol & minions that don’t support it

The New York Times reported that Williams’ 18-year-old son was killed in a shooting two years ago. His grandmother told the Times that Williams “never got over” the loss of his only child. Since then, she said he’s been withdrawn, and he started using heavy drugs, which she called his “downfall.”

The paper reported that Williams has a lengthy criminal record that includes a 2002 shootout with police, for which he was paroled in 2017. It did not indicate whether Williams’ son’s homicide has been solved or if there are any suspects in the case.

This isn’t the first time the union has sparked controversy on social media.

Last August, the union apologized after posting a video the New York Post called “overtly racist.” In it, the narrator complained about “Section 8 scam artists and welfare queens” and said that “almost literally no one has a job” in an urban environment.

The narrator later said, “A presidential administration succeeded in forever vilifying its nation’s police while simultaneously granting blacks crime as their new entitlement.”

The union also reportedly sent the video to its members in an email that read in part, “Pay close attention to every word.”

In his apology at the time, union president Ed Mullins said that he hadn’t listened to the narration before posting and emailing the video.

The union seems unlikely to apologize for the more recent tweet. Since then, it has retweeted several others blaming Democrats for attacks on police. The union also thanked one person who blamed de Blasio for a perceived lack of support for the police.