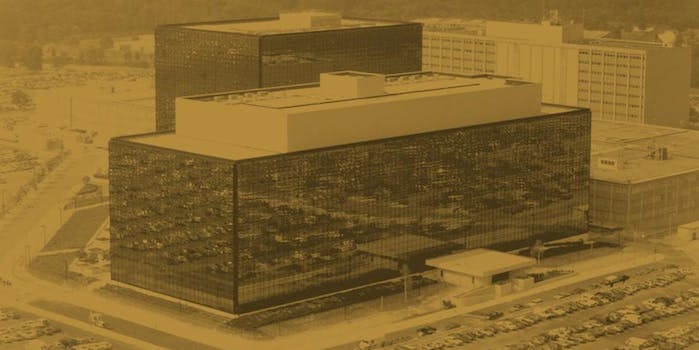 The Day We Fight Back: A lost battle, a new war

Google and the other tech giants who brought down SOPA haven't begun to fight the NSA with their full power.

On Tuesday, activists across the Internet took up virtual arms against the widespread surveillance efforts of the United States government. Blog posts were written, tweets were hashtagged, nearly 90,000 calls were made to the offices of elected officials, and approximately double that number of emails were deluged into the inboxes of those very same elected officials.

The action, dubbed The Day We Fight Back, supported a handful of specific proposals to curb what many see as the National Security Agency’s abuse of the broad surveillance powers granted to it in the wake of the 9/11 attacks.

Despite The Day We Fight Back being largely modeled on the anti-SOPA protest—the largest in Internet history—the two actions are quite different, most notably in the level of participation of the world’s most prominent tech companies.

When it came to fighting SOPA, the companies went all out:

Google put a censored bar atop its famous doodle and a link on its homepage inviting users to take action: 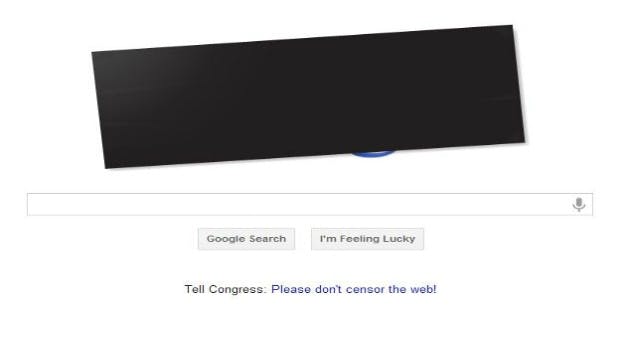 Reddit shut down its entire site, directing all users to actions they could take against the bill:

And, to the horror of high school students everywhere, Wikipedia went dark for a full 24 hours: 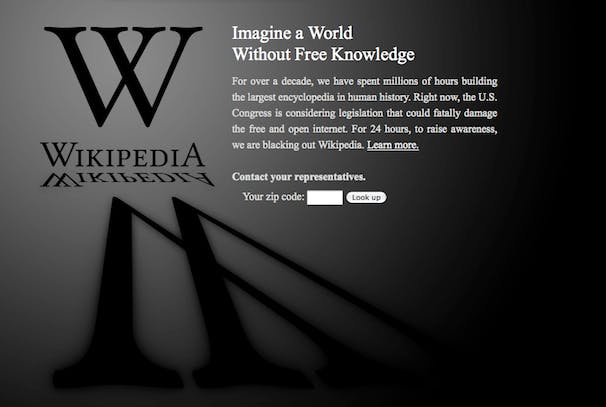 In contrast, the responses of tech companies on The Day We Fight Back were much more muted. Yahoo wrote a Tumblr post in support of the action. Microsoft’s VP of Government Affairs wrote a blog post about importance of reforming the surveillance regime, without specifically mentioning The Day We Fight Back by name. Despite some internal debate about the issue, Wikipedia didn’t do anything special to mark the occasion.

Instead of blacking out its site, Reddit put a pair of ads for the protest along on the right-hand side of its front page: 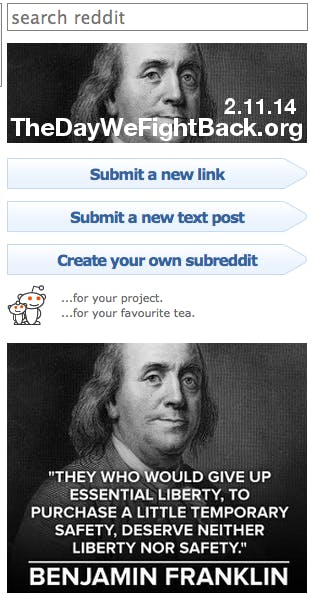 Google didn’t change its logo or enlist its powerful homepage in the fight, opting instead for a supportive blog post and a tweet.

It’s time to reform government surveillance. Join us in speaking up to Congress: http://t.co/RKsmb7UuSm #thedaywefightback

There’s been a feeling of creeping disappointment from certain activist corners of the Internet surrounding major tech firms’ unwillingness to go as far in support of The Day We Fight Back as they did in the battle against SOPA. A post in the New York Times’ tech-focused Bits blog even labeled it ?The Day the Internet Didn’t Fight Back.”

This lower level of commitment from tech’s leading corporate lights was to be expected. The fight against the NSA has very different implications than does the battle these firms successfully waged against SOPA in 2012. Therefore, it’s no surprise their tactics and level of commitment are also vastly different.

It’s important to remember that, at the time it came close to passing, SOPA represented an existential threat to the very existence of a large number of American Internet companies. It would have made the operators of a website liable for copyrighted content illegally uploaded by its users, and made it impossible to run social sites like Facebook, Twitter, Reddit, Tumblr, or Google’s YouTube.

Faced with a monster bill like SOPA, these companies felt they had no choice other than to throw everything they had at the situation. The bill died a few short days after the protest.

In contrast, the problem The Day We Fight Back aimed to solve isn’t as imminently dire for the organizations involved, although is still a serious issue. Outside of any civil libertarian ideological overlap between the leadership of the leading tech firms and the non-profit organizers of the event—groups like the Electronic Frontier Foundation and Demand Progress—the perception that the NSA has free reign to eavesdrop on anything sent over a network operated by a U.S.-based tech company disincentives people from using those services.

The immediate goal of The Day We Fight Back was to pass the USA Freedom Act, a bill that would end the widespread collection of cellphone metadata, appoint a civilian privacy advocate on the court that approves search warrants for domestic surveillance, and increase transparency across the entire domestic intelligence infrastructure. Even if the law, which hasn’t even been attached to a specific date on the legislative calendar, does succeed, it’s not going be enough by itself to solve what is essentially a growing image problem for American tech giants.

April Glaser, staff activist at the Electronic Frontier Foundation, explained that, because the target is now much bigger than a single piece of legislation, a different set of tactics is required.

Demand Progress Executive Director David Segal said Tuesday’s action was more about taking the first steps toward building a broad coalition dedicated to dismantling the security state rather knocking out the NSA with a single blow. “We’re still early in the fight,” he insisted.

He noted that it’s still too early in the effort to pass the USA Freedom Act, let alone curtail the NSA’s all-seeing eye, to lean hard on the tech giants to devote their homepages to the cause, even temporarily.

?It would be much more effective when there’s a floor vote scheduled to apply that level of public pressure,” Segal said.

Instead, many tech companies channeled their support for Tuesday’s event through a coalition called Reform Government Surveillance. The group, which includes Google, Microsoft, and Yahoo, has been pressuring Congress on the issue of surveillance for months, and seems likely to remain one of the primary instruments working to effect change going forward.

Prior to the event, organizers of the protest had engaged with tech leaders and were pleasantly surprised at their even offering this level of support.

“The companies did what everyone else did.” said Glaser. ?They blogged about it; they tweeted about it.”

The action did show some results. There were dozens of positive tweets and press releases sent out from sympathetic legislators like Senator Ron Wyden (D-Ore.) and Rand Paul (R-Ky.). The day after the protest, Paul announced he was joining a lawsuit against the Obama administration on the grounds that the large-scale collection of cellphone metadata is a violation of the Fourth Amendment.

Glaser said the Electronic Frontier Foundation is planning on bringing its anti-NSA efforts into the real world by organizing events on college campuses and with community groups across the country.

Even so, the lack of full-throated support from the tech giants did lead to much of the Internet greeting The Day We Fight Back with a collective shrug. This Google Trends chart shows how interest in the protest stacks up against interest in the addicting, and suddenly controversial, game Flappy Bird: 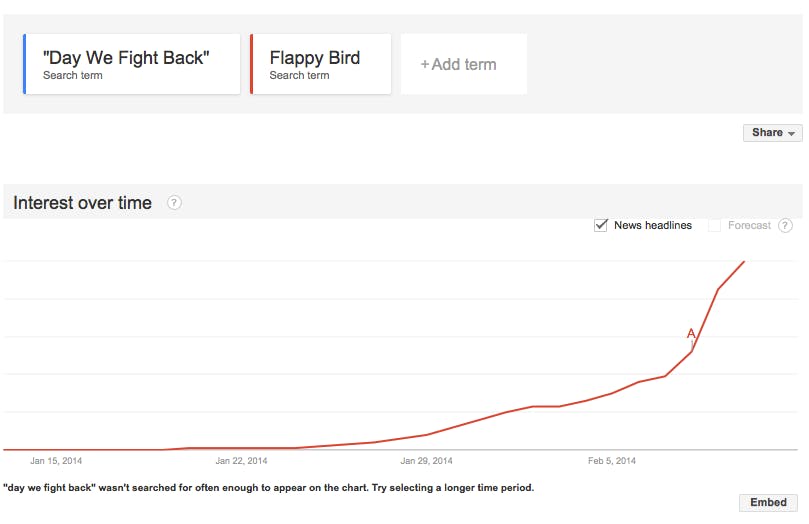 But, if the famously difficult Flappy Bird has taught us anything, it’s that some things aren’t easy. Some things take time, effort and mountains of frustration. For the activists behind The Day We Fight Back, it’s all about the long game.

?We weren’t expecting [the big tech companies] all to run our banner on their individual sites,” said Segal, ?but we are hoping they’ll escalate along with us further down the line.”

Update: In addition to writing a blog post in support of the USA Freedom Act, Google also sent out a email blast to all of the people on its public policy email list backing the protest.”

Photo via The Day We Fight Back