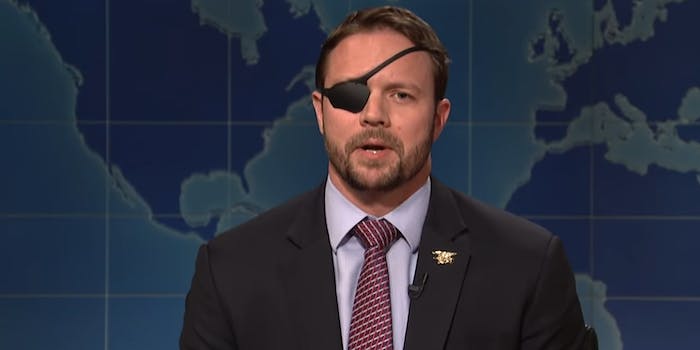 Amid the apology from comedian Pete Davidson to Daniel Crenshaw, several people online have pointed out that the Texas Republican—who will soon be a member of the House of Representatives—was previously affiliated with a Facebook group that posted wild conspiracy theories and racist imagery.

Crenshaw, a veteran who was injured in Afghanistan, appeared on Saturday Night Live this weekend in a surprise cameo in the wake of Davidson being criticized for mocking the congressman-elect’s eye patch. On Saturday, Davidson apologized for the joke, calling it a “poor choice of words.”

After the apology, Crenshaw appeared on the show and cracked a few jokes, calling for people on the left and the right of the political spectrum to come together.

“There’s a lot of lessons to learn here,” he said. “Not just that the left and right can still agree on some things, but also this–Americans can forgive one another. We can remember what brings us together as a country and still see the good in each other.”

Despite the acceptance of Davidson’s apology, people on Twitter quickly pointed out that Crenshaw was previously an administrator for a group on Facebook called “Tea Party,” which shared conspiracy theory posts and other questionable content. Florida gubernatorial candidate Ron DeSantis was also found to be an administrator of the group, as well as Corey Stewart, who ran a pro-Confederacy campaign in Virginia.

As the news of the congressman-elect’s apology acceptance spread—with many people pointing out that his appearance was wholesome and even funny at times—people online were quick to bring up his past affiliation with the group.

Crenshaw was a moderator of a Facebook group that promulgates conspiracy theories & racist memes and posted 2 of his campaign videos therehttps://t.co/a8ppKHs6rm https://t.co/8TDD499xZ6

Dan Crenshaw was one of the Republican candidates caught being a member of a Nazi Facebook group, and now the media is talking about him as the face of the decent Republican Party.

This is great. Love Pete apologizing, and Crenshaw accepting his apology in time for Veterans Day.

I’ll be waiting for Crenshaw’s apology about running an insanely racist Facebook group back in August but that’s probably not happening. https://t.co/1jgbuBXAy7 https://t.co/YDqT866RH7

As I thought about Dan Crenshaw's admittedly well constructed SNL appearance, I thought to myself, "how long until Milkshake Duck?"

I wonder whether @DanCrenshawTX will ever apologize for being an administrator of this Facebook group? https://t.co/FWNExIfxWg

Crenshaw is already being painted as a rising Republican star and future of the party. But he may not be that far removed from its current iteration.

In a debate for Florida governor, DeSantis denied that being involved with the page was reflective of his views.