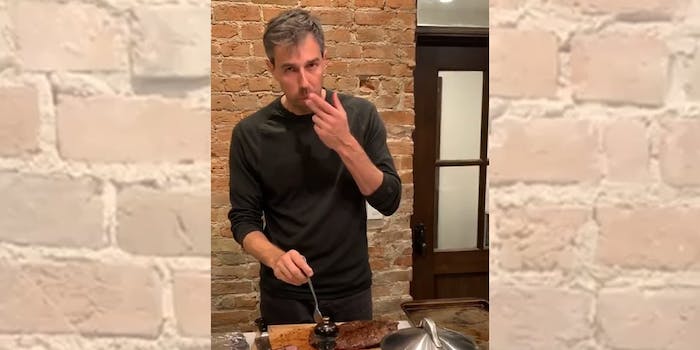 Beto is in chill mode—but people are hot and bothered.

A lot of people—Texans and non-Texans—started following Beto O’Rourke on social media during his run for Senate. We followed his never-ending road trips across Texas, watched him skate in a Whataburger parking lot, and sweat through his shirts. But since his loss to Republican Sen. Ted Cruz last week, Beto’s Instagram has become decidedly more chill.

He’s hiking with his family in El Paso.

But more importantly, he’s eating things that aren’t Whataburger. On his Instagram stories, he’s been snacking on guacamole while driving. Last week, he showed everyone a giant bowl of “Beto’s guac,” which his family set up for him to eat safely while driving.

This weekend he also made scones with his daughter and cut up a flank steak marinated in “soy, lime, and ginger.” The steak in particular—and Beto licking his fingers—has people feeling things.

Beto O’Rourke is cutting up flank steak over on Instagram in case anyone asks how it is I got pregnant. pic.twitter.com/vxpryuO30g

My sexual orientation is now Beto slicing up a steak pic.twitter.com/mKcdpHtqlq

He also found time to write a thoughtful note to supporters about what comes next and the influence his campaign had on future elections. There’s been talk of him running for president, but “For the time being, I am going to focus on being a better dad to our kids who have not had much of one for the last 22 months,” he wrote.

Some people made the comparison to Adam Scott’s Parks and Recreation character Ben Wyatt and his claymation hobby, as a way to say that maybe O’Rourke is going through a depressive phase after losing, but perhaps he’s just trying to get through it in his own way. And if that way includes more finger-licking I think we’ll be OK.