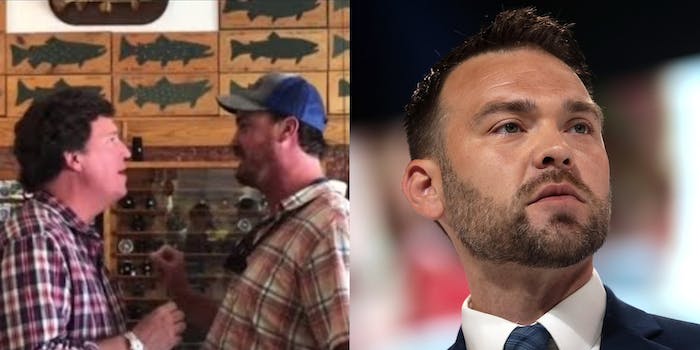 The conspiracy theorists is once again citing an un-named White House source.

Far-right commentator Jack Posobiec is claiming that the recent confrontation between a Montana man and Fox News host Tucker Carlson was a pre-planned plot involving the White House.

In a tweet on Sunday, Posobiec accused President Joe Biden of having foreknowledge of the viral confrontation before citing an alleged White House official.

“Just In: The White House knew about the Tucker ‘confrontation’ and the entire set-up was planned out in advance, per WH official,” he tweeted.

Carlson was confronted over the weekend in a fly fishing shop by a man later identified as Dan Bailey. A local fly fishing guide, Bailey told the Fox News host that he was the “worst human being known to mankind” for casting doubt on coronavirus vaccines.

Footage of the video quickly spread online and was met with a largely partisan response. Progressives applauded the man’s actions while conservatives criticized Bailey’s behavior. Conservatives quickly began spreading conspiracy theories about Bailey as well, accusing the Montana native of being a secret CIA operative.

Bailey, according to the International Business Times, did work in 2009 as a river ecologist for the Asia Foundation’s (TAF) ‘Securing Our Future’ project” in Mongolia. TAF was in fact established by the CIA as a non-profit in 1951 as part of an effort “to undertake cultural and educational activities on behalf of the United States Government in ways not open to official U.S. agencies.”

A 2017 article based on declassified documents from Muckrock, however, argues that TAF “has engaged in a decades-long campaign to misrepresent its origins, purpose, and funding” in order to hide its role as a “propaganda machine and a front for covert activities including psychological warfare.”

Yet no available evidence suggests Bailey, who is now a Yellowstone Program Manager at National Parks Conservation Association, was ever a direct employee of the CIA or even aware of the CIA’s ties to TAF, let alone that the confrontation was part of some devious clandestine plot.

Posobiec’s claim has already been met with skepticism from many of his supporters and outright condemnation from his detractors. The far-right personality regularly cites an unnamed “WH [White House] official” before making outlandish claims.

Reilley Neill, a former Democratic member of the Montana House of Representatives, immediately pushed back on Posobiec’s remarks.

“I live here among the people in the video. This is a progressive Montana town with about 7k people,” she said. “We know each other and no one is in contact with the WH lol. Better luck hatching a plot at the Murray happy hour! Whoever you think you are, your statement proves you’re a fool.”

Still, many conservatives took the conspiracy theory even further, arguing that the White House had clearly been surveilling Carlson in order to set up the confrontation.

“Boy how would they have known where he was going to be?” @PTMattSherman asked. “It’s almost like they’re listening in on his conversations.”

No evidence whatsoever at this time suggests that the confrontation between Carlson and Bailey was pre-planned in any way.