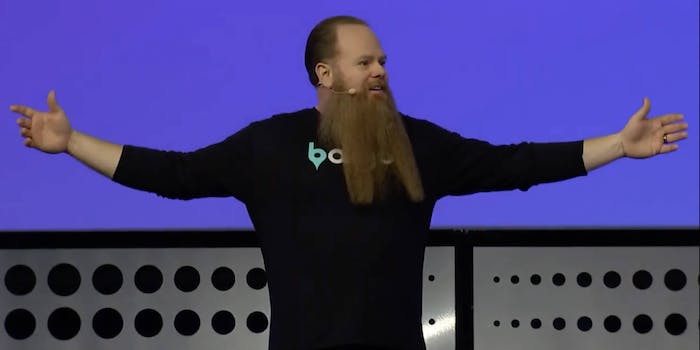 CEO of surveillance firm hired by Utah is former KKK

The CEO and founder of a surveillance firm hired by the state of Utah was involved with the KKK during his youth.

The bombshell finding, first revealed by OneZero on Tuesday, links Banjo CEO Damien Patton to the shooting of a Tennessee synagogue in 1990.

Patton made headlines in March after his company was awarded a five-year, $20.7 million contract by Utah to use its surveillance software to “detect anomalies.”

Specifically, Banjo says it utilizes artificial intelligence to analyze a wide range of sensitive data, including traffic and CCTV cameras as well as 911 emergency systems.

By feeding the system as much data as possible, Banjo claims, the software can alert law enforcement in real-time to everything, from child kidnapping cases to active shooter situations.

News of the contract immediately resulted in pushback from citizens and civil liberties advocates, who argued the software raised major privacy concerns.

But it wasn’t those concerns that ultimately led the Utah Attorney General’s Office to suspend its contract with Banjo on Tuesday. It was his involvement with the Dixie Knights of the Ku Klux Klan instead.

In its reporting, OneZero says it was able to locate “transcripts of courtroom testimony, sworn statements, and more than 1,000 pages of records produced from a federal hate crime prosecution.”

Patton found himself tied up in the legal system due to his involvement in a drive-by shooting at a Nashville synagogue in 1990 at the age of 17.

During grand jury testimony, according to OneZero, Patton openly “admitted to participating in white supremacist talks and meetings, where, according to his own testimony, speakers advocated for the elimination of Blacks and Jews, among other beliefs built around racism and religious discrimination.”

The shooting resulted in damage to the building but no one was physically hurt. Patton ultimately pled guilty to acts of juvenile delinquency while two others involved were charged with conspiracy to prevent or hinder the free exercise of another person’s constitutional rights.

Despite countless public appearances in recent years, Patton, unsurprisingly, had not commented on his past involvement with hate groups.

“Neither the attorney general nor anyone in the Attorney General’s Office were aware of these affiliations or actions,” said Richard Piatt, Reyes’ spokesman. “They are indefensible.”

Piatt added that while he believed Patton was remorseful for his past actions, the best decision moving forward would be to cut ties entirely with Banjo.

“We feel it’s best to suspend use of Banjo technology by the Utah Attorney General’s Office while we implement a third-party audit and advisory committee to address issues like data privacy and possible bias,” Piatt said. “We recommend other state agencies do the same.”

When questioned by OneZero on his history, Patton stated that his earlier path came as a result of being “a lost, scared, and vulnerable child.”

“I won’t go into detail, but the reasons I left home at such a young age are unfortunately not unique; I suffered abuse in every form,” Patton said. “I did terrible things and said despicable and hateful things, including to my own Jewish mother, that today I find indefensibly wrong, and feel extreme remorse for.”

Patton concluded by adding that he has spent most of his adult life “working to make amends for this shameful period in my life.”