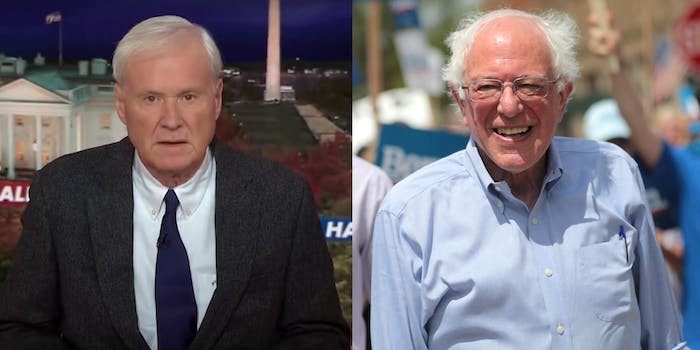 Sanders is Jewish and had family members who were Holocaust victims.

MSNBC’s Chris Matthews compared Sen. Bernie Sanders’ (I-Vt.) victory in the Nevada caucuses to the Nazi invasion of France on Saturday, and now viewers want him ousted from the network.

The host, along with many of his colleagues over at MSNBC, drew public ire over their apparent bias when covering the caucuses. Democratic strategist James Carville claimed that not only was Nevada a win for Sanders but for Russian President Vladimir Putin as well. Another reporter let out a noticeable sigh when reporting on the number of minority voters who were at the caucuses for Sanders. And Matthews made the Sanders win-Nazi invasion comparison.

“I’m reading last night about the fall of France in the summer of 1940. And the general, Reynaud, calls up Churchill and says, ‘It’s over.’ And Churchill says, ‘How can that be? You’ve got the greatest army in Europe. How can it be over?’ He said, ‘It’s over,'” Matthews said.

Sanders is Jewish and had family members who were Holocaust victims. Matthews was referencing Nazi Germany’s invasion and ultimate defeat of France during World War II, leading FireChrisMatthews and MSNBCmeltdown to trend on Sunday morning.

“For once, I’m not being sarcastic here. I’m dead serious. I’m really, really insulted by a major pundit on an allegedly liberal news network comparing a Jewish candidate’s overwhelming caucus victory to the French losing a battle with the Nazis,” investigative reporter Alex Kotch tweeted. “Get this lunatic off the air.”

Some even accused Mattews of antisemitism.

“FireChrisMathews for the disgusting and anti-Semitic attacks on Bernie Sanders. Comparing a Jewish man who literally lost family to the Holocaust for wanting to give everyone healthcare is BEYOND acceptable,” Twitter user @hangedman1984 wrote.

Sanders won Nevada with 46% of the vote with 60% of precincts reporting. The Nevada win, along with a victory in the New Hampshire primary and an essential tie in the Iowa caucuses, makes Sanders the clear 2020 Democratic primary frontrunner.

The Daily Dot has reached out to MSNBC.