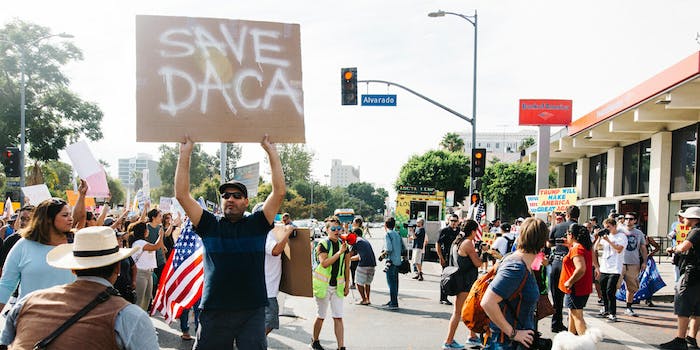 There is a lot of uncertainty moving forward.

The Senate reportedly has reached an agreement on an immigration bill that would codify the fate of recipients of the Deferred Action for Childhood Arrivals (DACA) program, it’s unclear whether President Donald Trump would sign any legislation–despite his administration punting the issue over to Congress last year.

While the Senate has a compromise in place, it’s unclear whether or not the bill would even get to Trump’s desk. The bill would need 60 votes, meaning all Democrats and several Republicans would need to sign off on it before sending it to the House of Representatives, which is controlled by more hard-line conservatives. House Speaker Paul Ryan (R-Wisc.) said the House would only consider an immigration bill that has the president’s blessing.

If the deal does pass through Congress, something that is far from a sure-thing, the White House has signaled it would oppose it because it does not address all of the proposed immigration reforms that Trump desires.

As such, the White House is considering issuing a veto threat to the legislation, Politico reported.

Trump’s administration forced Congress to address the DACA program last year when Attorney General Jeff Sessions said the program was “being rescinded,” making Trump’s demands hypocritical. The program, enacted by President Barack Obama in 2012, shields children who were brought to the United States as undocumented immigrants from deportation.

The administration set for DACA to expire on March 5, leading to the current push by congressional lawmakers to find a solution.

On Wednesday, a federal judge in New York ruled that the Trump administration must continue to process applications for DACA because their stane the program was unconstitutional was flawed.

You can read more about the Senate’s immigration bill here.