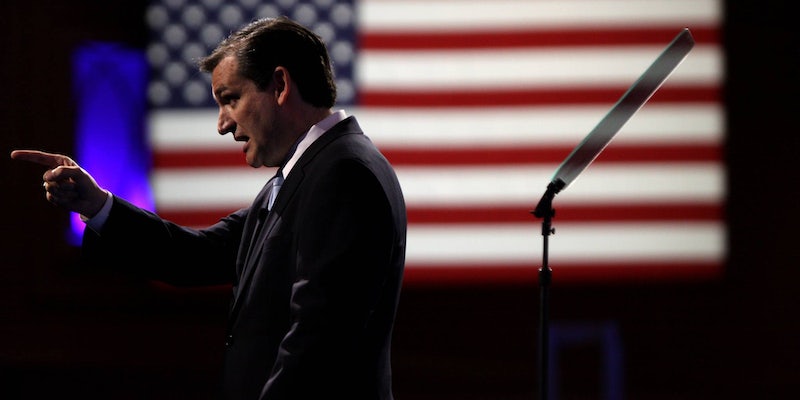 Ted Cruz announced his endorsement for Donald Trump after saying he would not support a man who attacked his family.

Ted Cruz has officially endorsed Donald Trump for president. Though the Texas senator refused to do so at the Republican National Convention and later said he would not support a man who attacked his family, Cruz has evidently changed his tune.

“After many months of careful consideration, of prayer and searching my own conscience, I have decided that on Election Day, I will vote for the Republican nominee, Donald Trump,” Cruz announced via a Facebook post on Friday afternoon.

Cruz listed two reasons for his decision. “First, last year, I promised to support the Republican nominee. And I intend to keep my word. Second, even though I have had areas of significant disagreement with our nominee, by any measure Hillary Clinton is wholly unacceptable — that’s why I have always been #NeverHillary.”

The former presidential hopeful then goes on to state six policies he is basing his support on and Trump and Clinton’s response to each.

Earlier this week, Trump endorsed Cruz’s stance with internet freedom. Both are against the US handing over internet control to an international body like China and Russia. Perhaps this was a hint to a thawing Trump-Cruz relationship.

Though Trump said he would not accept Cruz’s endorsement in July, he has done so in a statement on his website following the Facebook post. “I am greatly honored by the endorsement of Senator Cruz” Trump wrote. “We have fought the battle and he was a tough and brilliant opponent. I look forward to working with him for many years to come in order to make America great again.”

So what does this endorsement mean?

It is unknown whether this endorsement is a political disaster for Cruz or if it will help his image within the Republican party. After Cruz failed to support Trump at the convention, the audience booed him. To Trump supporters, Cruz appeared to be more concerned with his political career than the good of the GOP. If Cruz plans on making a comeback in 2020 or 2024, he will have to show his loyalty to the Republican party.

Cruz once called Trump a “serial philanderer” and a “pathological liar.” He later went as far as to urge voters to “stand and speak and vote your conscience” at the convention. He’s since twisted that message as a means of supports for Trump. If anything, his credibility is what’s on the line.

As for Trump, Cruz supporters are in the bag, providing a much-needed boost as Nov. 8 draws even closer.