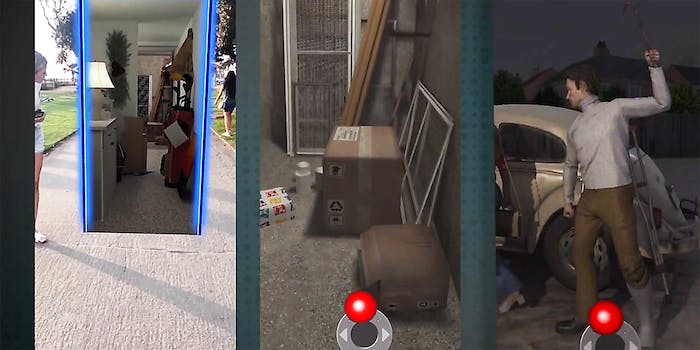 The app is touted as a 'one stop shop for fans of true crime to consume content.'

The app, which touts itself as a vital learning tool but has been met by many with shock and disgust, recently began promoting the upcoming feature.

In an email to Washington Post writer Maura Judkis, CrimeDoor announced that it would soon add Floyd to its growing list of deceased figures.

At current, the app offers access to virtual crime scenes that include everything from convicted child abuser Jeffrey Epstein’s jail cell to the Tennessee motel where civil rights leader Martin Luther King Jr. was assassinated.

One of CrimeDoor’s founders, Neil Mandt, recently described the app as a “one stop shop for fans of true crime to consume content.”

“Within that app, we have the ability to revisit crimes via augmented reality,” Mandt told the AP. “And that allows you to open basically a magical doorway in your living room. And you can walk into the crime scene as it was when the detectives were there.”

Unsure of what exactly the app entailed, the Daily Dot downloaded the CrimeDoor app for iOS. The app offers a handful of experiences for free, although visiting most crime scenes requires users to spend $1.99.

The app was able to project through the phone’s camera the crime scene where Nicole Brown-Simpson and Ronald Goldman were murdered in 1994. The app showed a 3D rendering of Nicole’s bloodied body laying on the floor.

While the app’s founders have described it as entertainment, Paul Holes, the AR Content Creator at CrimeDoor, has argued that the tool will actually help solve crimes.

“I believe the innovation of AR technology in criminal cases is as paramount as the introduction of DNA and will be critical to the future of solving cases.”

Yet it remains unclear how staring at the corpse of six-year-old JonBenét Ramsey in her Colorado basement, another crime scene offered by CrimeDoor, would help investigators solve the 1996 murder.

CrimeDoor has even gone as far as to promote its app on TikTok, a social media service popular among children. In a recent post, CrimeDoor encouraged TikTok users to visit the virtual murder scene of two teenage girls whose bodies were found in 2017.

CrimeDoor’s post also appears to suggest that TikTok users, for the low cost of $1.99, could help solve the case, known online as “the Delphi Murders.”

Aside from promoting its upcoming Floyd experience, CrimeDoor is highlighting a new feature that will let users visit the virtual crucifixion of Jesus Christ.