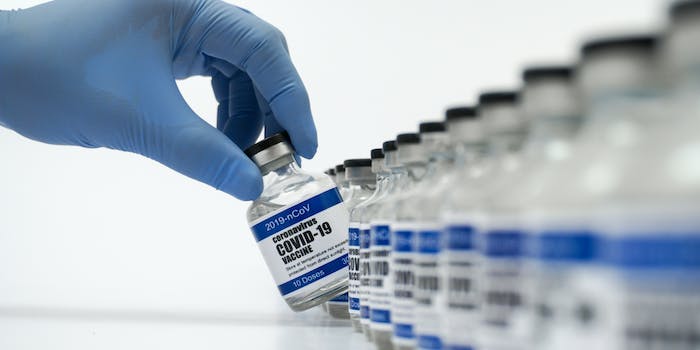 Like any crisis, the COVID-19 pandemic has been fertile ground for criminals looking to make a quick buck. Now, the COVID-19 vaccine is the latest frontier for pandemic-related scams.

Since the pandemic officially reached our shores a year ago, scammers have sold fake cures and dubious treatments, created apps that supposedly track COVID-19 cases but actually take over users’ devices, and targeted government stimulus programs for small businesses.

Given that the vaccine appointment roll out has largely been online—with people refreshing websites to schedule appointments or checking what requirements their state may have—it is not shocking that scammers would look to use the internet as a way to fraud people as they try to sign up to get vaccinated.

But vaccine grifts first appeared nearly a year ago, long before one had even been developed. Last March, the Verge reported that criminals were trying to trick people into providing credit card and social security numbers to reserve an appointment for a then-nonexistent vaccine.

The frequency and variety of such scams has skyrocketed as vaccines became available over the last few months.

Criminals wasted no time taking advantage of people’s desperation and vaccine rollouts that were rocky at best.

“The one thing that we’ve learned throughout this pandemic is that when there’s money to be made, criminals will figure out how to do it,” said Federal Bureau of Investigation (FBI) Financial Crimes Section Chief Steven Merrill, according to USA Today.

As of early January, federal law enforcement had prosecuted more than 100 cases, USA Today reports. That month, cybersecurity firm Check Point found that the number of ads claiming to sell vaccines on the dark web had increased by 400% in a month. The firm said that, as the number of ads increased, so did the price.

“In our previous report we saw an average median price tag of $250,” the company wrote on its blog. “Now our research shows vendors have now doubled or even quadrupled their prices, asking $500 or even up to $1000 for an unspecified dose.”

Anyone who orders a vaccine on the dark web is likely to be disappointed. Check Point reports paying $750 in Bitcoin for a vaccine in a transaction arranged via Telegram. A few days later, the seller claimed they’d shipped the vaccine. It never arrived, Check Point says. Soon thereafter, the seller deleted their account and vanished.

There have been reports of vaccines being offered all over the web, from social media to popular marketplaces. In January, Inside Edition tracked down a Florida man it said was selling two vaccine appointments for $10,000 apiece on Craigslist.

Victims of such scams may have an arguably nefarious purpose—skipping ahead in the vaccine line—but they’re not the only ones falling prey to bad actors. Innocent consumers are increasingly being targeted.

Federal authorities in Maryland seized two websites mimicking those of pharmaceutical companies who were developing COVID-19 treatments in an apparent attempt to collect victims’ personal information. The websites reportedly had similar names, logos, and graphics of the actual companies, Moderna and Regeneron.

Fraudsters have also started calling and texting people to schedule vaccine appointments for a fee. The appointments aren’t real and any funds remitted simply vanish, as vaccines are free.

Senior citizens and others who are less tech-savvy are particularly susceptible to these types of swindles.

Callers offering vaccine appointments have claimed to be associated with the “local health department” or your “insurance provider,” USA Today reports, but often don’t reference the geographic location or insurance company. They also may claim to be from the Social Security Administration, which doesn’t contact people to schedule vaccines.

The Federal Communications Commission (FCC) warns, “No one from a vaccine distribution site, health care provider’s office, pharmacy, health insurance company or Medicare, will call, text, or email you asking for your Social Security, credit card, or bank account number to sign you up to get the vaccine.”

The FCC also cautions people not to click on links in unsolicited or unexpected texts or emails promising a vaccine appointment.

The FBI has issued a warning about COVID-19 fraud schemes.

Within that warning, the bureau said people should be suspicious of unsolicited vaccine offers; ignore advertisements promising to sell the vaccine or an appointment to receive it; not to provide personal or financial information to anyone other than medical providers you know and trust; and use two-factor identification and other safeguards generally recommended to protect against fraud.

Other tips include checking for typos in websites purporting to offer vaccines; verifying claims that a vaccine is approved by the Food and Drug Administration; and checking medical bills for suspicious claims.

The government itself has been something of an unwitting accomplice of sorts for criminals throughout the pandemic. Constantly changing and inconsistent distribution and data has made it difficult for people to be sure of procedures and best practices, making them into softer targets.

The Federal Trade Commission states, “…[S]cammers, always at the ready, are taking advantage of the confusion.”