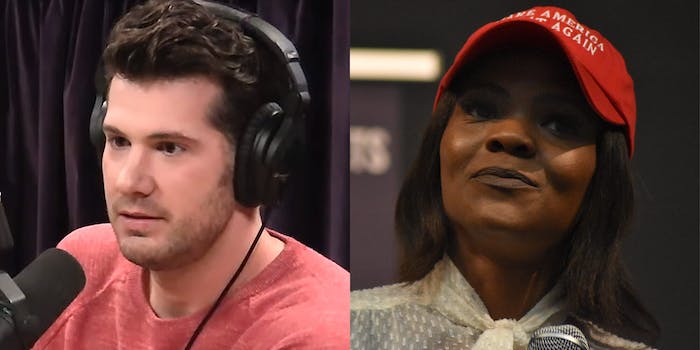 They don't math or science so much.

Right-wing internet personalities have become coronavirus death toll truthers. People like Candace Owens and Steven Crowder seem to believe that there’s a global conspiracy to use the virus as an excuse to take down President Donald Trump or something.

They base this belief on decreases in the estimated death toll from 100,000 to 60,000. Yesterday Dr. Anthony Fauci told NPR that the reduction is largely based on people overwhelmingly embracing social distancing.

Apparently it’s difficult for some to wrap their minds around the idea that prevention works and that can change estimates.

Owens, formerly of Turning Point USA, went first. Yesterday afternoon, the woman who doesn’t think human papillomavirus (HPV) is contagious tweeted that estimated coronavirus deaths have decreased because “the models were always bullshit, the media was lying, and the virus was never as fatal as the experts that are chronically wrong about everything, prophesized.”

In reality, the virus’s morbidity in the U.S. is actually significantly higher than the two percent most predicted a month ago. Based on reported deaths and confirmed cases, it’s 3.6 percent fatal. However, assuming that not all who’ve been infected have been tested, it could actually be lower—such data, like the models, is preliminary.

Not to be outdone, YouTube shouter Crowder teed one up a few hours later.

The man whose previous antics include attempting to hang himself on livestream basically repeated Owens’ point about the decline in estimated deaths, with a special Crowderesque twist of appropriating the common 9/11 remembrance phrase, “NEVER forget.” As one does.

It didn’t take long for the comments to explode with disgust and facts, which neither Crowder nor Owens have a particularly close relationship with.

Several accused Crowder of celebrating 60,000 deaths in the U.S. alone.

Many pointed out that models are estimates based on numerous factors, many extremely difficult to predict, and hence will shift as conditions change. For example, the 2.2 million death toll was a worst-case scenario based on the U.S. doing nothing; stay-at-home orders and social distancing have served to significantly reduce predicted deaths.

But what do facts matter when you’re trying to whip your fans into an anti-media, anti-science frenzy?

To date, nearly 17,000 have died in the U.S.; the total number of confirmed cases is approaching half a million.