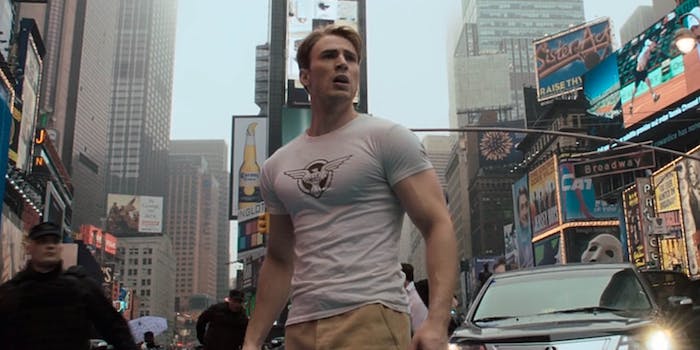 The coronavirus pandemic might have ruined everybody’s 2020 plans, but at least it’s given us some entertaining conspiracy theories—entertaining, that is, until you remember some people take them seriously.

Film critic William Mullally shared one such conspiracy theory on Twitter, which he worked tirelessly to crack. It’s an Instagram post featuring a still image from the 2011 film Captain America: The First Avenger. Chris Evans is standing in Times Square with a slew of billboards behind him, including one advertising Corona beer and one that appears to show a “virus.”

The post, shared by @lexfuture, insinuates that the coronavirus—and, somehow, the death of George Floyd—are both part of a “massively planned agenda,” and that naysayers are “sheep if you still don’t get this.”

Mullally was intrigued by the “virus” billboard, so he did some sleuthing to uncover its origins. At first, it reminded him of a YA novel. It bore similarities to the cover of Veronica Roth’s Divergent, but it wasn’t a dead ringer.

Undeterred, Mullally enlisted his friend, Wes, to obtain a clearer screenshot of the billboard. He discovered the filming date of the Captain America scene—April 23, 2011—and scoured the list of Broadway shows released around then. No matches there, either.

Finally, Mullally resorted to watching random YouTube videos of Times Square from April 2011, while Wes combed Bing and Google street view. Finally, Wes found an HD photo of Times Square with a clear view of the virus billboard. They had the final piece of the puzzle to blow this coronavirus conspiracy wide open.

The billboard was an advertisement from international Italian food company Barilla. The “virus” is actually a bunch of spaghetti noodles arranged to look like a firework or an ornament. The ad says “Buone Feste”—“Happy holidays” in Italian.

Looks like @lexfuture can chalk this one up as a loss. But it makes you wonder: Why was a pasta billboard ostensibly designed for Christmastime still standing in April? What is that nefarious, international pasta syndicate planning? Whenever one door closes, another one opens.