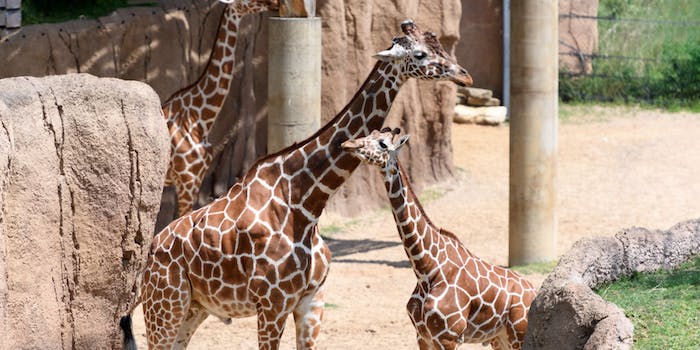 The Dallas Zoo has yet to receive any vaccines for its animals.

Conspiracy theorists are falsely claiming that three giraffes at the Dallas Zoo died after receiving the COVID-19 vaccine.

The allegations first began spreading on Nov. 2 after CNN reported on the deaths, which came just two months after the zoo announced its plans to vaccinate certain at-risk animals against COVID.

The two headlines were cited as proof by anti-vaccine advocates across social media that the inoculations had caused the deaths. Jordan Sather, a prominent supporter of the QAnon conspiracy theory, shared the claim to his more than 70,000 followers just last week.

“Sounds like vaccinating the animals made them sick and weak,” Sather wrote.

Yet the first death, which occurred on Oct. 3, came after the zoo was forced to euthanize a three-month-old giraffe named Marekani due to a “catastrophic” injury to one of its legs.

The second death, which involved a 19-year-old giraffe named Auggie, took place on Oct. 22 after the animal suffered an “age-related health issues that led to liver failure,” according to the zoo.

In a statement to CNN, the zoo said that it was looking into whether the last two deaths were related. The zoo is not only testing for the presence of any zoonotic diseases but is attempting to determine whether the two giraffes were exposed to any toxins.

“We are doing extensive lab testing on blood and tissue samples from Jesse and Auggie to identify commonalities and further pinpoint what may have happened,” the zoo said. “The necropsy results from both giraffes pointed to liver damage, which is leading us to focus on the possibility that they were exposed to a toxin of some sort, either through a food source, in the exhibit space, or introduced via a foreign object.”

The Daily Dot was also able to confirm that none of the giraffes had received a vaccine for COVID. In fact, the zoo revealed that it had yet to receive any of the vaccines at all, which it intends to use on animals known to catch COVID from humans such as great apes and big cats.

“We have not yet received the vaccine,” the zoo told the Daily Dot. “With that in mind, we can say with certainty that the recent giraffe deaths are not related to the vaccine.”

The Dallas Zoo also told the Daily Dot that giraffes are not among the animals it intends to vaccinate.

Aside from falsely claiming that the giraffes were inoculated against COVID, conspiracy theorists have also alleged that the vaccines for animals are identical to those administered to humans. The argument has been raised in an attempt to defend the use of ivermectin, an anti-parasite drug used both in humans and animals that anti-vaxers believe cures COVID, despite studies failing to prove such a therapeutic benefit.

But just like ivermectin, the COVID vaccines for humans and animals are not the same. The COVID vaccine used in animals is manufactured by Zoetis, a company that focuses specifically on medications for animals.

Bill Price, the vice president of communications for Zoetis, confirmed in a statement to ABC10 in March that its vaccines are not “applicable to human health.”

Animals vaccines are also approved by the U.S. Department of Agriculture (USDA), not the Food and Drug Administration (FDA), as is the case for humans.

“We do testing to make sure their safety and efficacy to be used in animals, but it’s not a vaccine that would be transferable to other species, such as humans,” Price said.