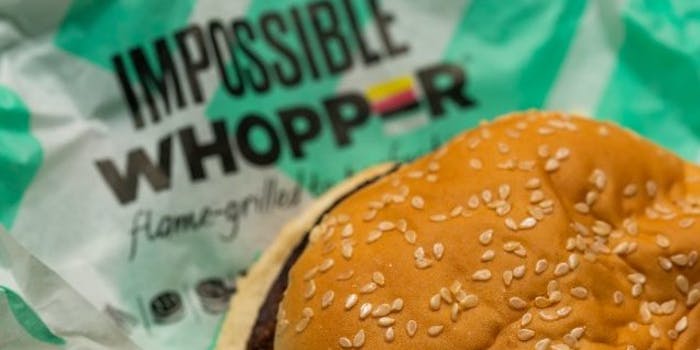 Burger King’s plant-based Impossible Whopper made a big splash on the fast-food scene when it arrived last summer.

Now conservatives are spreading a theory that the vegan burgers will give men breasts.

The rumor is based on an article in the Tri-State Livestock News, a commercial cattlemen’s publication. Written by a veterinarian, the article says that eating enough Impossible Whopper can cause manboobs because the burger has 18 million times more estrogen than a regular Whopper.

“Just six glasses of soy milk per day [emphasis added] has enough estrogen to grow boobs on a male,” it states. “That’s the equivalent of eating four Impossible Whoppers per day.”

It’s long been rumored that soy milk causes men to grow breasts because it contains phytoestrogen, a naturally-occurring compound found in a host of plant-based foods and beverages, including strawberries, apples, carrots, almonds, yams, lentils, coffee, beer, and bourbon, according to Medical News Today. Phytoestrogen mimics estrogen when consumed by humans.

However, scientific evidence that consuming phytoestrogen causes gynecomastia, the medical term for enlarged breasts on men, is sorely lacking.

“Since male transgender patients take estrogens to stimulate breast growth, it has been assumed that soy might have the same effect,” Men’s Journal reports, “This appears to be a myth, or at least is not supported in the medical literature.”

Nevertheless, the rumor took hold, prompting the Washington Post to debunk it. The Post noted that Tri-State Livestock News is written for cattle ranchers who have “declared war” on plant-based meat substitute manufacturers Beyond Meat and Impossible Foods, which supplies the Impossible Whopper patties.

No, there’s no evidence that eating Impossible Whoppers will give men breasts https://t.co/hdC7TvZMqf

Alas, facts matter little on the far-right in the face of titillating misinformation, so the rumor continues taking root.

The National File editor-in-chief Tom Pappert wrote a piece that misleadingly implied that the original article was written by a medical, not veterinary, doctor, before concluding, “In short, the Impossible Burger is a genetically modified organism filled with calorie-dense oils that can make a man grow breasts if eaten in sufficient quantity.” Fellow InfoWars contributor Paul Joseph Watson also weighed in, writing, “The science on whether substantial soy consumption feminizes men is still disputed, although given what many soy enthusiasts look and sound like, there appears to be a strong correlation.”

Transphobia was a common theme in tweets spreading the rumor.

Dudes..Do you want to grow Breasts?
East the #Impossibleburger. It has enough Estrogen to make you grow those Trans lookin' tits you always wanted!
UH OH!
Boy it sucks that you can't short private companies isn't it?
FLUSHHHHH you can hear the value toilet flushing!#FrogsGay pic.twitter.com/ed7sQMLkw1

Sure, let's turn our boys into girls fast!!! What a great agenda!

Social engineering is not enough apparently these days, so let's do it with the food that we eat!https://t.co/86hx0BwUbp

Eat real meat. Save the Planet.

Fuck Vegans. That is all.https://t.co/E3rgZ9VSRY

Many people pushed back against the rumor.

Some noted that the nutritional content of cuisine at Burger King (or any fast food, for that matter) can cause moobs. “I’m pretty sure it’s soda big gulps and super sized orders of fries that are causing men to grow breasts, not impossible burgers,” @rob_breeding tweeted.

Others cautioned that people should consider the source.

There is no overlap in the venn diagram of men who think the impossible whopper will give them breasts and the men who would even read this article, let alone believe it https://t.co/fDlej4K0vX

So men, you can eat all the impossible burgers that you want and you won't grow breasts at all. I mean… you might gain weight, if you eat enough, but no breasts. I promise. It's kinda fun to watch some people freak out about this, though.

Dear everyone on Keto-Twitter gleefully posting this article from an alt-right website suggesting that the Impossible Burger will cause men to grow breasts because it has soy: did you read to the bottom and notice that the author works for Alex Jones? https://t.co/Uh8l6bxJav pic.twitter.com/uICRk5vmTu

Neither Burger King nor Impossible Foods have weighed in on the rumor.