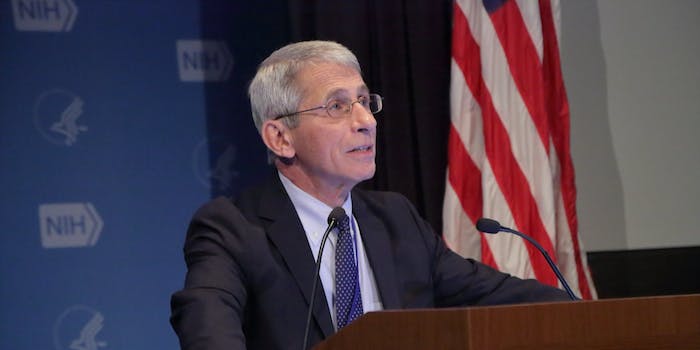 Fauci actually said vaccinated people may still be able to spread the virus.

On Tuesday, Dr. Anthony Fauci warned Americans who’ve been vaccinated against resuming their pre-pandemic lives because it’s not yet known whether they can spread COVID-19.

“So there are things, even if you’re vaccinated, that you’re not going to be able to do in society: for example, indoor dining, theaters, places where people congregate,” Dr. Fauci said. He added that once the nation achieves herd immunity, estimated at when 70-80% of the population is vaccinated, or scientists are certain those who have taken the vaccine can’t spread the virus, it will be safe for them to resume normal activities.

Now, conservatives online are accusing the nation’s top immunologist, whom they love to hate, of being an anti-vaxer. They apparently don’t appreciate the distinction between saying scientists don’t yet know if the vaccinated can spread the virus, and that the vaccine is pointless.

They wasted no time commenting on conservative outlets’ coverage of Fauci’s comments.

“Could you ask for a more dangerous anti-vaxx campaign?” tweeted @rikkiratliff.

By far the most common reaction was to wonder why anyone would get the vaccine. Others felt his statements were evidence he is drunk on power. Many said that he was actually diminishing confidence in the vaccine.

Lots of the comments came from anti-vaxers. As of November, 40% of the population said it would not take the coronavirus vaccine, Pew Research Centers found. That’s a decrease from roughly half who said they wouldn’t take it in September.

“Great! That leaves those that are NOT vaccinated to dine indoors and go to movies!” commented one.

Right-leaning satirical website the Babylon Bee covered the dust-up in a piece called, “Dangerous conspiracy theorist doesn’t believe vaccines work.” Although Dr. Fauci did not say vaccines are ineffective, some felt that its story was too close to the truth to be labeled satire.

“This is just the news at this point,” said @StephenScoville, along with the hashtag #FireDrFauci.

The United States reached 500,000 COVID-19 deaths on Tuesday. To date, 13% of the population has received at least one dose of the vaccine, NPR reports.