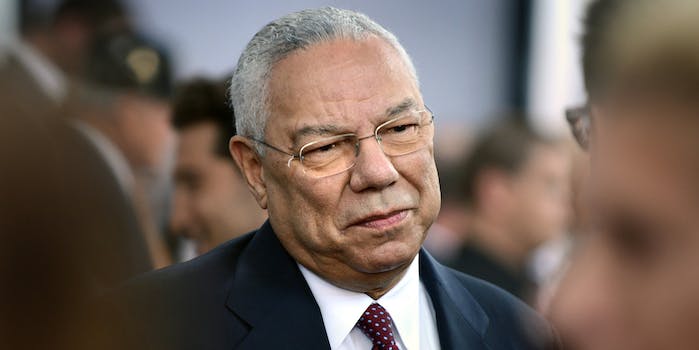 'Hillary’s Mafia keeps trying to suck me into it.'

Former Secretary of State Colin Powell privately criticized both Donald Trump and Hillary Clinton in hacked emails released to the media this week by unknown sources.

In one June email to journalist and former Powell aide Emily Miller, Powell called Trump, the Republican presidential nominee, a “national disgrace” and an “international pariah.” Powell, a retired four-star general, later told Miller that Trump is running a “racist” campaign that evolved from the candidate’s skepticism that President Barack Obama was born in the United States.

“Yup, the whole birther movement was racist,” Powell said in an Aug. 21 email to Miller obtained by BuzzFeed News. “That’s what the 99% believe. When Trump couldn’t keep that up he said he also wanted to see if the certificate noted that he was a Muslim.”

The emails were published on the website DCLeaks.com, which is rumored to be operated by Russian intelligence and has connections to Guccifer 2.0, the hacker behind the ongoing release of Democratic National Committee emails, whom the FBI believes is also connected to Russian intelligence. The emails are currently only accessible with a password and only certain media outlets were given access.

“Everything HRC touches she kind of screws up with hubris.”

Powell confirmed the authenticity of the emails to NBC News and BuzzFeed News, which first reported on the emails.

Emails obtained by the Intercept and the Daily Caller show the depth of Powell’s frustration with Clinton, the Democratic nominee and former secretary of state, who said Powell advised her to use a private email account for official State Department business. “Hillary’s Mafia keeps trying to suck me into it,” Powell wrote of “emailgate” in an email obtained by the Daily Caller.

“Sad thing,” Powell wrote. “HRC could have killed this two years ago by merely telling everyone honestly what she had done and not tie me to it.”

In an August 2015 email to Powell’s business partner, Jeffrey Leeds, Powell lamented Clinton pushing the boundaries of private email use, which he attributed to her “hubris.”

“They are going to dick up the legitimate and necessary use of emails with friggin record rules. I saw email more like a telephone than a cable machine,” Powell wrote. “As long as the stuff is unclassified. I had a secure State.gov machine. Everything HRC touches she kind of screws up with hubris.”