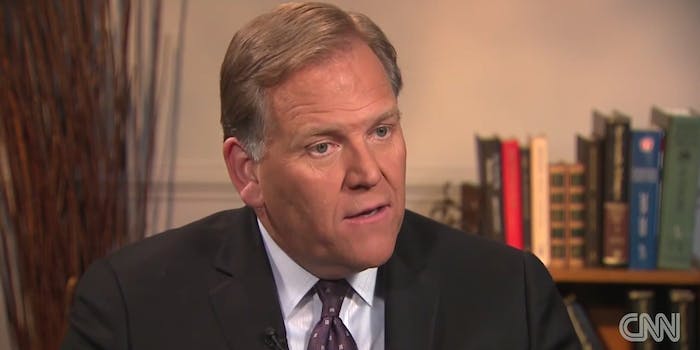 If nothing else, this should at least be entertaining.

The former congressman who coauthored one of the Internet’s most-hated bills and backed NSA spying is getting his own show on CNN.

CNN announced the show, appropriately titled Declassified, in a Friday morning press release, along with a documentary program about the 1980s.

Declassified will be an eight-episode series that “delves into true stories of America’s covert operations around the world,” CNN said in its statement.

“Each episode features a newly declassified mission told firsthand by the agents who lived it, while getting unprecedented access to the riveting and secret world of espionage,” the network said.

As a member of Congress, Rogers was an unapologetic backer of the U.S. intelligence community, frequently inveighing against critics of surveillance programs and civil-liberties activists when they called for reforms. He pushed hard for the controversial Cyber Intelligence Sharing and Protection Act (CISPA), a bill he coauthored with Rep. Dutch Ruppersberger (D-Md.), as it neared passage in April 2013, and he called opponents of the bill “14-year-old tweeter[s] in the basement.”

Rogers described NSA whistleblower Edward Snowden as “a high-school dropout who had a whole series of both academic troubles and employment troubles.” He also suggested that the Russian government had helped Snowden leak the massive cache of documents that informed the world of the scope of U.S. surveillance operations.

Privacy groups and surveillance-reform advocates cheered Rogers’ announcement in March 2014 that he was planning to retire at the end of the previous session of Congress.