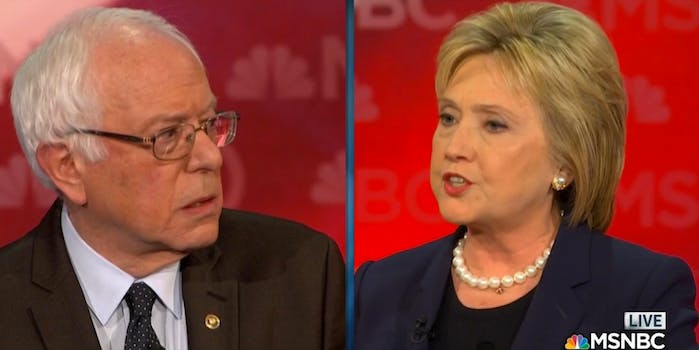 Who’s the real establishment candidate in the 2016 Democratic presidential race?

Clinton shot back in one of her strongest attacks yet on the Vermont senator.

“Well, look, I’ve got to just jump in here because, honestly, Senator Sanders is the only person who I think would characterize me, a woman running to be the first woman president, as exemplifying the establishment,” Clinton said. “People support me because they know me. They know my life’s work. They have worked with me and many have also worked with Senator Sanders. And at the end of the day, they endorse me because they know I can get things done.”

Watch Hillary Clinton shoot down Bernie Sanders' characterization of her as "The Establishment" #DemDebate https://t.co/OTm3injQlk

Sanders, 74, and Clinton, 68, have both spent much of their adult lives in public office. After serving as mayor of Burlington, Vermont, for eight years, Sanders served as a United States congressman for 16 years. He was elected to the U.S. Senate in 2007, where has served since.

Following eight years in the White House as first lady, Clinton went on to serve another eight years as U.S. senator for New York, from 2001 to 2009. She then served as secretary of state under President Barack Obama during his first term, after a failed bid for the presidency in 2008.

The arguably extensive establishment histories of both Sanders and Clinton remained a moot point during the debate, with the candidates instead deciding to hone in on other specifics.

After Clinton claimed that a “respected economist” said the senator’s single-payer healthcare plan would cost an extra $1 trillion per year, Sanders replied using one of his core talking points, reminding viewers that he does not have a super PAC supporting his campaign, and criticized Clinton’s super PACs for receiving more than $15 million from Wall Street firms in the last quarter.

“But time and time again, by innuendo, by insinuation, there is this attack that he is putting forth … [that] anybody who ever took donations or speaking fees from any interest group has to be bought,” Clinton said. “And I just absolutely reject that, senator. And I really don’t think these kinds of attacks by insinuation are worthy of you. And enough is enough. If you’ve got something to say, say it directly.”

At the end of the exchange, Clinton told Sanders, “it’s time to end the very artful smear that you and your campaign have been carrying out.”