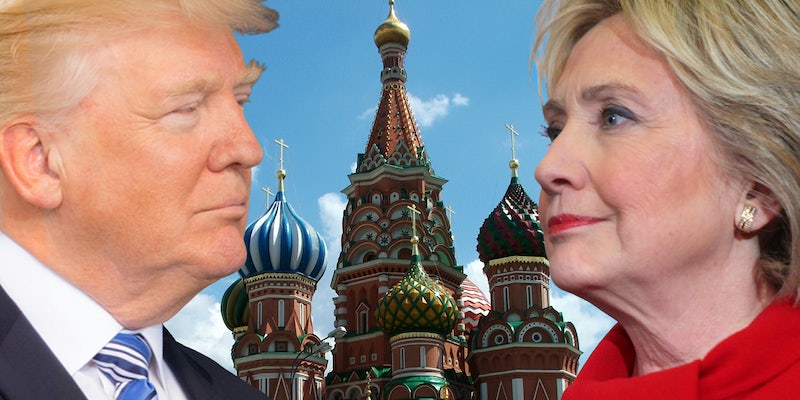 A new report has ignited a scandal that ropes in Trump supporters' favorite enemy: Hillary Clinton.

A major American politician is being accused of colluding with Russia in what critics say is one of the biggest scandals of the year. We’re talking, of course, about Hillary Clinton.

President Donald Trump on Thursday morning joined right-wing news outlets, personalities, online communities, and even accounts linked to Russian disinformation campaigns in calling out a recent report from the Hill that links the Clinton Foundation to possible illegal activity surrounding a 2010 uranium deal between the United States and Russia.

The Hill’s report shows that FBI investigators found evidence that the Russian nuclear industry was involved with “bribery, kickbacks extortion and money laundering” ahead of the 2010 deal. The report also claims “Russian nuclear officials had routed millions of dollars to the U.S. designed to benefit former President Bill Clinton’s charitable foundation during the time Secretary of State Hillary Clinton served on a government body” that helped facilitate the deal.

With Trump’s campaign currently under federal investigation for possibly having ties with Russia in efforts to disrupt the 2016 election, the Hill’s report offers a juicy opportunity for the president’s supporters to deflect the conversation off of Trump and onto the Clintons—an opportunity even the president can’t refuse.

The Department of Justice began investigating the scheme in 2010 and carried it out for four years. During that time, the deal was made, which essentially gave Russia 20 percent of America’s uranium.

“The Russians were compromising American contractors in the nuclear industry with kickbacks and extortion threats, all of which raised legitimate national security concerns. And none of that evidence got aired before the Obama administration made those decisions,” a source told the Hill.

Unsurprisingly, the mention of “Clinton” and “Russia” had pro-Trump voices running with the notion that the report proved collusion between the country and the former presidential candidate. Unlike stories that are unflattering to Trump, this particular report escaped their media insult of choice: “fake news.”

Reddit‘s The_Donald, a popular pro-Trump community, used the news to further support their claims that Clinton is “corrupt,” with some openly hoping Trump uses the news as a reason to put her in prison–or worse, as some of the comments suggest.

“WHAT THE FLYING FUCK. That’s absolute treason by the Clintons. How the hell did they not lock them up?” Reddit user usa_foot_print posted.

Some on The_Donald and elsewhere online flagged the report as a way to discredit Robert Mueller, special counsel for the Justice Department who is overseeing the Trump–Russia probe. Mueller was director of the FBI at the time the bureau was investigating the alleged uranium bribery scheme. According to Trump supporters, his previous role demands that he recuse himself from investigating Russia and Trump.

“If Mueller was involved, he’ll have no option but to recuse himself as special counsel,” redditor blueeyephoto wrote. To which user throwmefarawayagain replied: “Exactly. Dominoes[sic] could be falling…”

However, government officials told the news outlet that they were unsure whether the FBI or the Justice Department alerted members of the committee that approved the deal about the investigation.

It isn’t just Trump supporters that have latched onto the news. A tool created by the Alliance for Securing Democracy initiative at the German Marshall Fund dubbed Hamilton 68 found that Twitter accounts linked to Russian influence schemes spread this story far and wide.

The hashtag “#ClintonRussiaCollusion” spiked among monitored accounts known to be linked to Russia’s influence networks by nearly 10,000 percent since the original story broke. Other phrases related to the story such as “Uranium One,” and “bribery” were also trending topics, according to the Alliance For Securing Democracy.

The burgeoning Clinton–Russia scandal will not end with a few tweets and Reddit posts, however. The Senate Judiciary Committee this week launched an investigation into the Russian nuclear bribery case, helping to ensure that this controversy is just getting started.