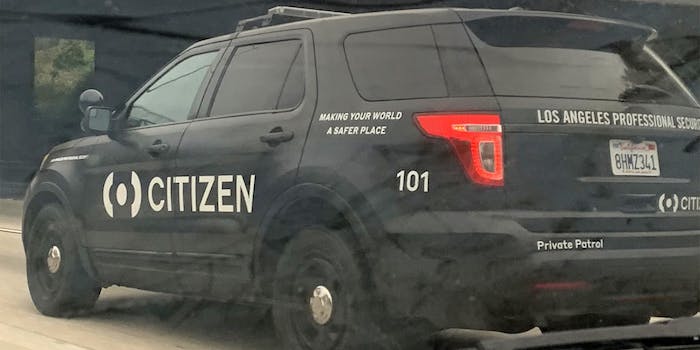 They say the car is part of a pilot program in Los Angeles. But didn't offer more details.

On Thursday, the Daily Dot asked Citizen several questions about the vehicle, which was spotted on social media earlier this week. In response, a spokesperson for the app told the Daily Dot that the car is part of a “pilot program.”

They added that there is only one car, that it was “for our employees,” and that the vehicle was only in Los Angeles.

The spokesperson did not answer follow up questions about the purpose of the vehicle or the pilot program, when the pilot program was launched, or what Citizen’s employees actually do with the car. We’ll update this story if we hear back.

Brandon Wenerd posted a photo of the car, which resembles a police vehicle and has Citizen branding on it, on Wednesday.

Motherboard notes that the “Los Angeles Professional Security” branding on the back of the Citizen vehicle is a private security company that offers “subscription law enforcement service” including “a potent combination of technology, K-9 support, and patrol personnel.”

It’s unclear what the company’s relationship with Citizen is.

Citizen sends alerts to users about local crime. It has faced criticism in the past for encouraging vigilantism and anxiety and perpetuating racial profiling.

The app made headlines earlier this week after it offered a $30,000 reward for information that led to the arrest of someone it said was wanted in connection with wildfires in California.

However, the man the app’s users were searching for was the wrong guy. Los Angeles police had questioned the man and eliminated him as a suspect, according to reports.

Citizen said that the photo being posted was an “error” and they did not have “formal coordination with the appropriate agencies.”