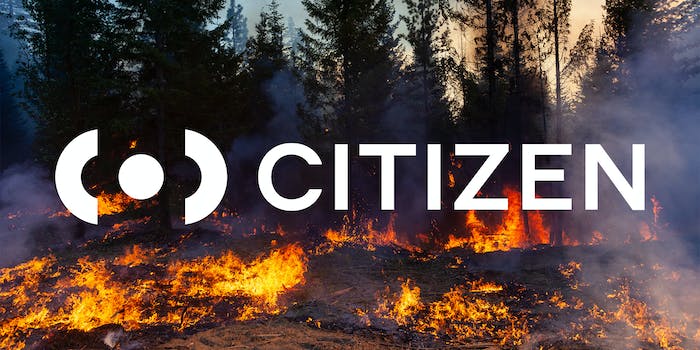 People thought they were watching a dystopia unfold.

An image of a man suspected of committing arson in connection to a wildfire in California was posted on the “personal safety network” app Citizen late last week, sparking a manhunt for him. However, it turns out users were looking for the wrong guy.

On Sunday, Citizen sent out an image of the man and a notification that there was a $30,000 reward (offered by the app) for information that led to an arrest, according to Cerise Castle, a reporter.

The Citizen broadcast asked for people to “hunt this guy down” and “bring this guy to justice,” Castle tweeted.

In the broadcast, a pair of unidentified hosts took tips and calls from people trying to find the man.

Journalist Eric Levai also posted audio of the broadcast where people talked about driving up and down the street to “try and find this guy.”

However—there was a major issue. Los Angeles police questioned the man and eliminated him as a suspect, the Los Angeles Times reports. In fact, the man in the photo wasn’t who an LAPD officer in a helicopter had seen igniting fires.

In a statement to the Times, Citizen said that the photo being posted was an “error” and that they did not have “formal coordination with the appropriate agencies.”

“We publicly posted the photo and offered a cash reward for information without formal coordination with the appropriate agencies. Once we realized this error, we immediately retracted the photo and reward offer. We are actively working to improve our internal processes to ensure this does not occur again. This was a mistake we are taking very seriously,” Citizen told the Times.

The company told the newspaper that the photo came from a tipster.

The Citizen app has faced criticism for encouraging vigilantism and perpetuating racial profiling.

A community activist pointed out the issues in an interview with Philadelphia Magazine last year, noting: “If I’m walking down the street with a red hoodie on and someone gets an alert that someone with a red hoodie did something, then obviously I become an automatic suspect.”