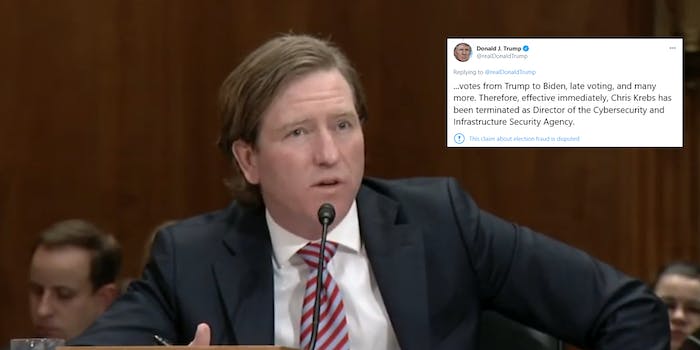 President Donald Trump late Tuesday announced that he fired Chris Krebs, the director of the Cybersecurity and Infrastructure Security Agency (CISA) after the agency shot down claims of voting conspiracy theories.

The president made the announcement late Tuesday, but it comes after CISA released a statement that pushed back against Trump’s repeated and unsubstantiated claims of voter fraud and other nefarious situations with voting.

Last week, CISA released a statement calling the 2020 election “the most secure in history” and that there was “no evidence that any voting system deleted or lost votes, changed votes, or was in any way compromised.”

Also, earlier on Tuesday, Krebs himself pushed back on allegations that election systems were manipulated.

“ICYMI: On allegations that election systems were manipulated, 59 election security experts all agree, ‘in every case of which we are aware, these claims either have been unsubstantiated or are technically incoherent.’ #Protect2020,” Krebs tweeted on Tuesday morning.

Those statements contradict Trump’s view that the election was “rigged” or votes were somehow changed to be against him. So on Tuesday night—much like other dismissals throughout his presidency—Trump announced that Krebs had been “terminated” and called the statement from CISA “highly inaccurate.”

“The recent statement by Chris Krebs on the security of the 2020 Election was highly inaccurate, in that there were massive improprieties and fraud – including dead people voting, Poll Watchers not allowed into polling locations, ‘glitches’ in the voting machines which changed…” the president said in a series of tweets. “…votes from Trump to Biden, late voting, and many more. Therefore, effective immediately, Chris Krebs has been terminated as Director of the Cybersecurity and Infrastructure Security Agency.”

Twitter put labels on both of Trump’s tweets saying “this claim about election fraud is disputed.”

Shortly after Trump’s tweet, Krebs sent out a tweet of his own, saying he was “honored to serve.”

Krebs also retweeted actor Mark Hamill who commented on Trump’s tweet by saying that Trump fired the CISA director for “refusing to lie for me, your #LiarInChief.”

Trump’s decision to fire Krebs was met with intense backlash, including among several prominent Democrats.

“The firing of Chris Krebs is just the latest in what has been a four year war against the truth by Pres. Trump,” Coons wrote. “Chris Krebs was doing his job protecting our elections from cyberattacks. That’s something that should be celebrated, not result in his abrupt & retaliatory firing.”

Rep. Ted Lieu (D-Calif.) pointed out that Krebs was appointed to CISA by Trump, so “there was no reason for Krebs to lie when he concluded the elections were secure and fair.”

“Chris Krebs is a Trump appointee. There was no reason for Krebs to lie when he concluded the elections were secure and fair,” Lieu tweeted. “@realDonaldTrump fired Krebs for telling the truth. @POTUS can keep firing people, but he can’t change the fact that he lost the presidential election.”