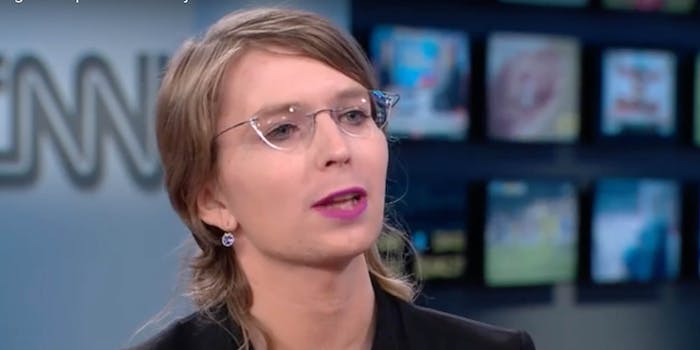 The order comes a day after Manning's reported suicide attempt.

The release of former Army intelligence analyst Chelsea Manning was ordered by a federal judge on Thursday.

The order comes a day after Manning’s reported suicide attempt.

She has been incarcerated since May for refusing to testify before a grand jury in the investigation of WikiLeaks and its founder Julian Assange. According to Judge Anthony Trenga’s court order, Manning’s imprisonment was deemed “unnecessary.”

“Her detention no longer serves any coercive purpose,” Trenga wrote.

Manning has been ordered to pay the $256,000 in fines accrued on a daily basis for refusing to testify. However, she does not have to pay the fines in order to be released. Manning’s hearing regarding her confinement, which was scheduled for Friday, March 13, was canceled. The fines are described in court documents as not being “punitive, but rather necessary to the coercive purpose of the Court’s civil contempt order.”

In 2013, Manning was given a 35-year military sentence for leaking classified government and military documents to WikiLeaks. Former President Barack Obama commuted her sentence in 2017. She was jailed once again, two years later, for refusing to comply with the grand jury’s subpoena.

It is unclear when Manning will be officially released.