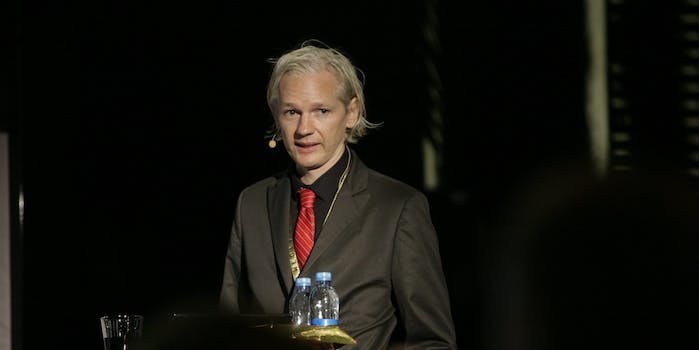 She says her source later told her he could be arrested for telling her that.

A writer for the far-right site the Gateway Pundit claims that President Donald Trump ordered acting Director of National Intelligence Richard Grenell to secure the arrest of WikiLeaks’ founder Julian Assange over a year ago.

It has previously been reported that Grenell, who is also the U.S. Ambassador to Germany, had conversations with the Ecuadorians about Assange before his arrest last April when he was still holed up in the nation’s British embassy in London. This week was the first time news emerged that Trump ordered Grenell to see to his arrest.

The Gateway Pundit writer, Cassandra Fairbanks, an outspoken advocate for Assange’s release, posted the audio of a phone call with Grenell’s close associate Arthur Schwartz in which Schwartz says that Grenell was acting on Trump’s orders. Schwartz also says that he could be arrested for the things he’d told her about the deal to arrest Assange.

“I highly doubt I would tell her anything real, accurate or of any importance,” Schwartz told Politico, and said that Fairbanks is “not someone that I trust.”

Schwartz added that he didn’t really recall the conversation, and posited that he just told Fairbanks some “nonsense” to get her to stop trashing one of his friends on social media.

Fairbanks alleges that in October 2018 Schwartz first told her the U.S. had struck a deal to arrest Assange. On Periscope last night, she said that she posted a link to an interview with Assange’s mother in a group chat with Grenell, Schwartz, other journalists, members of the Trump campaign, and social media influencers where they regularly share ideas and stories.

Fairbanks says that Schwartz warned her to stop publicly supporting Assange, that continuing to do so could jeopardize her standing in Trump’s inner circle. She says he told her she would change her mind about Assange after learning the extent of his actions.

“He was saying that Julian got people killed, got people tortured,” she said.

She said that Schwartz—who has been described as Donald Trump Jr.’s fixer—told her that the president’s son and others, including him, had reversed their positions on Assange after learning what he’d done, which she claims he said included getting Americans killed.

“It was classified and everyone’s changed their minds now that they know,” she recalled him saying.

Fairbanks says she personally asked Assange about these allegations on a subsequent visit. She doesn’t recall precisely what he said, but he seems to have denied it. Fairbanks also told Assange that the U.S. was working out a deal to arrest him.

She continued publicly advocating for his release. When it became clear that Assange was going to be kicked out of the embassy, she visited him again. In the past, she says that the embassy let Assange’s visitors in and out without much hindrance. This time, they locked her in a room, made Assange get a full-body search, and gave them only a few minutes to talk in a room with video and audio surveillance.

Subsequently, on March 29, Fairbanks says Schwartz contacted her with a warning.

“He called me and he told me that he knew that I had told Assange [he was going to be arrested] and that there was a State Department investigation into who leaked me that information,” she said.

Fairbanks played audio of the phone call on the Periscope video.

“I told you some things that were not to be repeated and you repeated them to him … this is too emotional for you and I can’t tell you anything,” Schwartz says in the audio.

Fairbanks claims that Schwartz told her that the U.S. wasn’t going to pursue charges over the Democratic National Convention hacking or for Vault 7, a trove of CIA files WikiLeaks published, and would only charge him for the materials Chelsea Manning leaked.

After Assange’s arrest the following month, ABC News broke the story about Grenell serving as the go-between.

Fairbanks says she sent Schwartz a screenshot of the passage about Grenell and asked if this was how he knew about Assange’s imminent arrest. He, she says, sent her a shrug emoji, followed by a barrage of messages, including one saying Assange deserved the death penalty.

Fairbanks then tweeted wondering why the German ambassador was involved in the negotiations.

Schwartz, she says, called and asked her to take the tweet down, claiming that it was classified and she was putting him or his associates at risk of getting arrested. She refused.

“He said that Grenell was acting on direct orders from President Trump to secure a deal to arrest Assange,” Fairbanks said.

In September, when it was reported that Grenell was being considered to take over for National Security Adviser John Bolton, Fairbanks tweeted about it again.

Within hours, she says Schwartz called her asking her to delete the tweet. Previously he’d been pleasant; this time, he was upset.

Yesterday she tweeted audio of the phone call.

This time she complied.

“I’ll delete my tweet, only because you’re saying you’ll get in trouble,” she says.

Assange’s extradition trial is currently underway in England. His lawyers have claimed that the U.S. extradition request is politically motivated. Fairbanks is expected to testify.