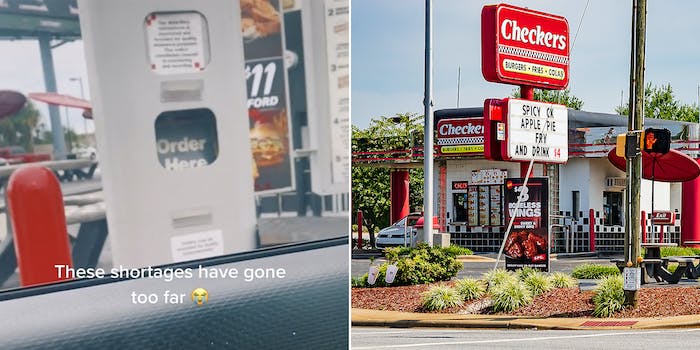 ‘These shortages have gone too far’: Checkers drive-thru worked by robot in viral TikTok, sparking debate

'The future is here.'

A viral TikTok posted yesterday revealed a robotic voice operating a Checkers drive-thru. The video sparked debate about the causes and consequences of automation.

The video posted by user @joshmay, which now has over 796,300 views, showed an automated voice messaging system taking orders at a Checkers drive-thru location in Florida.

Based in Tampa, Checkers and Rally’s is a fast-food chain with over 850 restaurants across the country. In January 2022, Checkers announced plans to roll out automated voice-ordering technology to approximately 250 locations by the end of the year.

Josh May, the TikToker who posted the viral video, told viewers that “the future is here yall, I was so confused what was happening.” He complained that “these shortages have gone too far,” likely referring to labor shortages for in-person jobs in the United States caused by the COVID-19 pandemic.

A 2021 survey conducted by the National Restaurant Association found that “84% of operators saying their current staffing level is lower than it was in the absence of COVID-19.”

Checkers and Rally’s CEO Frances Allen told QSR magazine that she believed “without a shadow of a doubt” the restaurant industry’s labor shortage is here to stay. She pointed to pandemic labor shortages as one reason for the implementation of voice-ordering technology, alongside the benefits of reducing costs and increasing order accuracy.

The video posted by May sparked controversy about this automation technology, labor shortages, the minimum wage, and the treatment of fast food employees.

Many users argued that the robotic voice system was not a result of labor shortages, instead blaming Checkers for not wanting to pay employees a fair wage.

“There aren’t shortages, they won’t hire people,” one commented.

“There’s no shortage of labor. People just can’t afford to take $9 per hour jobs. Cost of things has increased so much it’s not even worth it,” another responded.

“It’s two things: not hiring AND people can’t afford to work a $9 per hour job. It doesn’t even pay half the bills,” a third agreed.

The minimum wage in Florida is currently $10 an hour, while the federal minimum wage is $7.25 an hour. Labor movements like Fight for $15 have argued that “labor shortages” are not an accurate labeling of what is going on with the restaurant workforce. Instead, they claim there is a “wage shortage.”

A few users disagreed, arguing that demanding a high minimum wage was actually the cause of automation:

“They wanted $15 an hour, now they’ve been replaced,” said one user.

“That’s what happens when everybody wants $20 an hour,” another agreed.

People in the comments also debated whether or not they like the robot assistant.

“She’s so polite and got the order correct,” one user commented.

“I didn’t hear her say ‘is that all?’ Twelve times or interrupt you,” another noted.

“100% support this. No attitude, no passive aggressive comments, no feeling like I’m a burden, easy and convenient. Love this,” a third said.

Other users were disgusted by those who complained about the attitudes of fast food employees and those who blamed employees for wanting a livable wage.

“Maybe they wouldn’t have an attitude if customers treated service staff like PEOPLE. Y’all get a rush from demeaning someone in a lower station than u,” one user replied.

“Imagine going to work every day being told you’re unskilled and incompetent by the people you’re serving,” a second responded.

“They are working a hell job 40+ hours a week to still be in poverty,” a third said.

Checkers is not the only fast food company that will implement AI technology in the coming years. In 2019, before COVID-related labor shortages, McDonald’s announced that it would experiment with voice-based, conversational technology. In 2021, one McDonald’s location in Chicago launched a voice-operated drive-thru system.