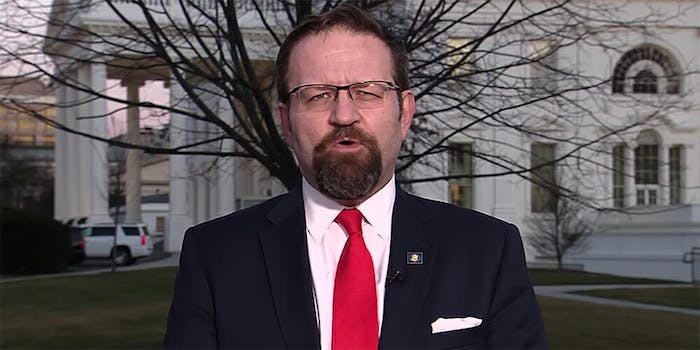 'Did you have any questions about there being a culture war, ladies and gentlemen?'

The cartoon launched its 22nd season premiere this week with the marriage of Arthur’s teacher Mr. Ratburn to his spouse Patrick, a local chocolatier.

Although many celebrated the show for including the storyline, Gorka used his radio show America First to claim the union of two male cartoon animals was part of a wider leftist conspiracy to destroy “civil society.”

“My children used to watch Arthur 15 years ago, about a rodent-like creature that lived and had fun in his cartoon world,” Gorka ranted. “The new season of Arthur will have one of Arthur’s teachers at school, a male teacher, married to a fellow male rodent.”

“Did you have any questions about there being a culture war, ladies and gentlemen? Did you have any doubt in your mind?” he continued. “This is a war for our culture, and that’s why we exist here, on America First, on the Salem Radio Network.”

The stance, although controversial, is not entirely unexpected from someone like Gorka, whose connections to the far-right have been under scrutiny for some time.

Journalists have examined his apparent ties to a Nazi-associated Hungarian nationalist group, political collaboration with Pizzagate conspiracy theorists, and his views on Islam.

Gorka was a national security editor at right-wing publication Breitbart but is best known for having served as one of President Donald Trump’s close aides. He left the White House shortly after former chief strategist Steve Bannon in 2017, also Breitbart alumnus.

Gorka isn’t a lone voice on the issue, however. One Million Moms, a group connected with religious conservative nonprofit the American Family Association, launched a petition against the Arthur episode and accused PBS of “pushing an agenda.”

“Discussion of such controversial topics and lifestyle choices should be left up to parents,” the petition reads. “PBS Kids should not introduce this to young children. Just because an issue may be legal or because some are choosing a lifestyle doesn’t make it morally correct.”

The petition has collected over 13,000 signatures.