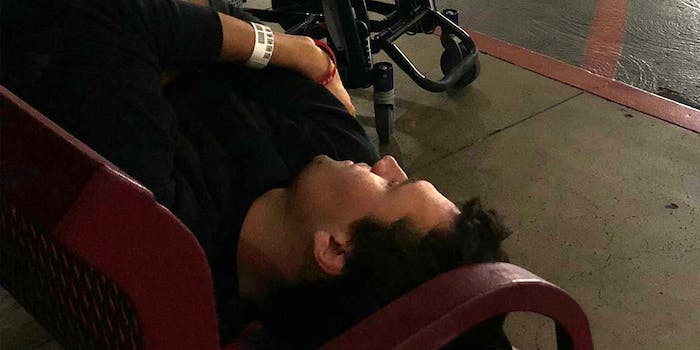 Charlie Kirk’s love of U.S. healthcare system put to the test after back problems

Charlie Kirk took a trip to the hospital Monday night and Twitter can’t stop talking about it.

A friend of the conservative activist, Kyle Kashuv, posted a photo to Twitter Monday evening. In it, Kirk lies prone on a bench in what appears to be the parking garage of  Cedars-Sinai Hospital in Los Angeles.

“I’m with my buddy @charliekirk11 in Los Angeles who was rushed to the hospital for a potential blood clot,” the caption reads. “He threw out his back and can’t stand and the hospital said there are no beds available and suggested he lay on a bench outside Cedar Sinai Hospital [sic], disgrace!!!”

Considering that Kirk is well known for his views on healthcare—namely, that healthcare isn’t a ‘right,’ but a privilege, and that the U.S. system is the best in the world—people were quick to point out the hypocrisy.

Senator Rand Paul Expertly Explains Why Healthcare Is NOT A Right! #BigGovSucks pic.twitter.com/zfQIzM4rS2

“Rights come from God.” ~Charlie Kirk Why don’t you have God take a look at that clot as well as your back? He won’t mind meeting you at the outside bench.

Given the amount of time Kirk has spent talking about healthcare on Twitter, there were plenty of examples for people to choose from. @classiclib3ral responded to the original tweet, posted by Kashuv, by sharing an old tweet from Kirk.

“The United States has the best healthcare system in the world,” Kirk tweeted back in Feb. 2017. “We just need to make it cost less via competition and choice.”

Others thought Kirk staged the scene. But given his past stance on healthcare, it’s not clear what that would achieve.

I'm laughing so hard that I can't breathe at Charlie Kirk forgetting to take his wristband off before pretending that the hospital wouldn't admit him because they gave all their beds to people on food stamps or whatever pic.twitter.com/WEb2VJPFEP

Kirk sent an update to Twitter Tuesday morning. “Still cannot stand or walk,” he wrote. “But despite all the leftists commenting wishing for my suffering to continue or my imminent death, don’t worry I’ll be just fine.”

Still cannot stand or walk, but despite all the leftists commenting wishing for my suffering to continue or my imminent death, don’t worry I’ll be just fine. https://t.co/qs34VcUR06

No one is wishing for Kirk to continue suffering, just that he use this experience to consider what life could be like for someone who couldn’t afford insurance.

Cedars-Sinai Hospital and Charlie Kirk did not respond to a request for comment.