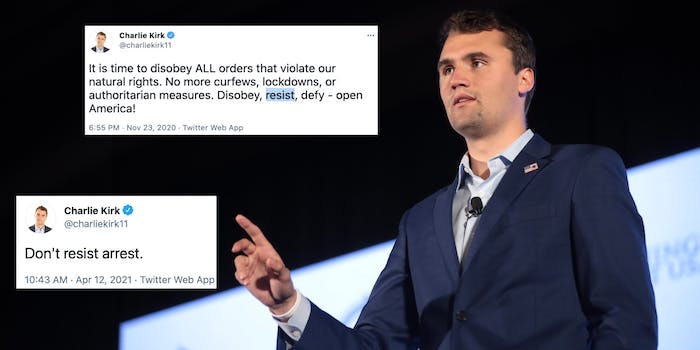 'It is time to disobey ALL orders that violate our natural rights,' Kirk said last year.

Right-wing commentator Charlie Kirk is being accused of hypocrisy in the aftermath of Daunte Wright’s death at the hands of Minnesota police.

Kirk, founder of the conservative student group Turning Point USA (TPUSA), appeared to reference the shooting on Monday when he told his followers not to resist arrest.

Wright, a 20-year-old Black man, was shot and killed during a traffic stop on Sunday after an officer with the Brooklyn Center Police Department allegedly pulled her firearm instead of her taser.

But it appears Kirk’s rules don’t apply to himself or his supporters. The conservative was quickly reminded that he had openly encouraged fellow conservatives to “resist” efforts from the government to limit the spread of the coronavirus last November.

“It is time to disobey ALL orders that violate our natural rights,” Kirk tweeted. “No more curfews, lockdowns, or authoritarian measures. Disobey, resist, defy – open America!”

Kirk’s tweet on Monday was flooded with screenshots of his previous remark, with many accusing the conservative of having a double standard.

Even the Libertarian Party of Tennessee weighed in, suggesting that Kirk would have been opposed to the actions of the country’s founding fathers.

“Charlie Kirk would absolutely tell the founding fathers to stop resisting the British so they don’t get shot,” @LPTN1776 said.

Others pointed to famous police shootings in which the victim never defied orders at all before being killed.

Numerous references were also made to January’s failed insurrection, in which supporters of former President Donald Trump defied orders from police and stormed the Capitol.

As is often the case, Kirk seems entirely undeterred by the fact that so many of his tweets buckle under even the slightest scrutiny.