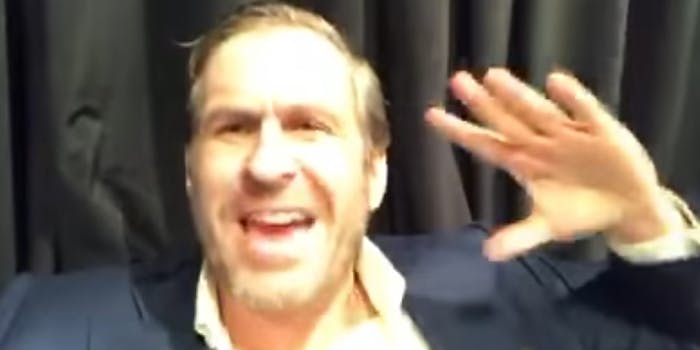 This is exactly the thing liberals were accused of doing to Trump.

If that sounds somewhat familiar, don’t be shocked. The alt-right has claimed that liberal power players were paying protesters to disrupt Donald Trump rallies and other campaign events held during the 2016 election.

In a video posted last week, Cernovich offers up to 10 people $1,000 each if they are able to be escorted out of the Julius Cesar performance.

“I need you to get up with either a ‘CNN is ISIS’… or ‘Bill Clinton’s a rapist’ or ‘the media is terrorism,’ and if you’re able to get up and be escorted out by security then I will give you $1,000,” he said, holding his arms up like he was holding a sign.

The New York Public Theater rendition of Julius Cesar has drawn ire from right-wing camps because the titular character is modeled after Donald Trump—and is assassinated. (It’s worth noting that a clear message of William Shakespeare’s Julius Ceasar is that the assassination of Ceasar led to the downfall of democracy, not the other way around.) Alas, several corporate donors of the production, Delta and Bank of America, have pulled funding following the public outcry. The National Endowment for the Arts—a federal department facing heavy cuts under President Trump’s budget—also distanced itself from the production, making clear that no NEA funds went toward that particular production.

Bank of America specifically said they were pulling their funding because it presents the character in “such a way that as intended to provoke and offend.”

Cernovich’s call seems to have worked.

Several days after his offer, one woman made a Periscope video of herself stopping the production.

The woman, Laura Loomer, walked across the stage and yelled, “Stop the normalization of political violence against the right. This is unacceptable. We cannot promote this type of violence against Donald Trump.”

She even says “CNN is ISIS,” as Cernovich suggested in his video. The audience immediately starts booing her.

Loomer was eventually charged with criminal trespassing for her stunt, according to the New York Times. The New Yorker reported that Loomer said she had the idea to protest the play before Cernovich’s offer.

Here is the video with Cernovich’s monetary offer.