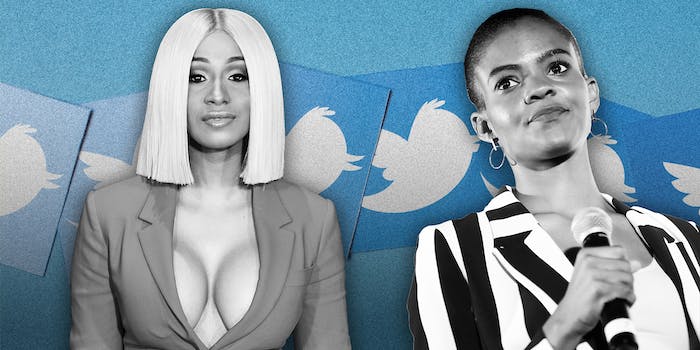 Cardi B, Candace Owens threaten to sue each other over ‘WAP’-adjacent Twitter spat

In an epic clash of online titans, Cardi B and conservative professional agitator Candace Owens have threatened to sue each other over the former’s tweet about Owens’ marital affairs.

The initial salvo came from Owens, talking to Fox anchor Tucker Carlson, suggesting people like the Queens rapper and icon is part of the “erosion” and the “weakening of America society.” Cardi apparently took some humor in it.

She also said Owens helped boost the views on her Grammys performance, which has faced outrage from the far-right, with her comments.

The short tweet series made to Owens and she had to say something useless and patronizing while calling Cardi by her gubment name.

When Owens asked Cardi about her “obsession” with the Trumps, saying Cardi B had been digging up old photos of Melania, Cardi replied with a mocking aspirational tone about Melania Trump.

“I’m obsessed; she’s my idol,” said Cardi. “She showed me I can be naked perform wap and still be a First Lady one day ! ….wait so only White women can be naked and show their sexuality and evolve in their 30s, but I can’t? Wow, America is soo unfair. To think this was the land of the free.”

When Owens decided to admonish her, Cardi decided to choose violence. She quote-tweeted an alleged tweet from Owens about her husband cheating on her with her own brother. The questionable tweet got a little run on some gossip sites, but there’s no way to know if it was legitimate.

That escalated into a war.

Cardi B threatened to sue her over Owens saying the tweet was photoshopped.

And if that wasn’t enough, Owens, evidently unable to let go of the fact that she was out-trolled in an argument she effectively started, hopped onto Instagram for a 13-minute video about Cardi.

Understanding she’s now living rent-free in Owens’ head, with her dirty boots on the sofa, Cardi suggested they continue the debate with a little beach playtime.

Owens declined, saying she’d rather see Cardi B in court.

But Cardi pressed the issue: