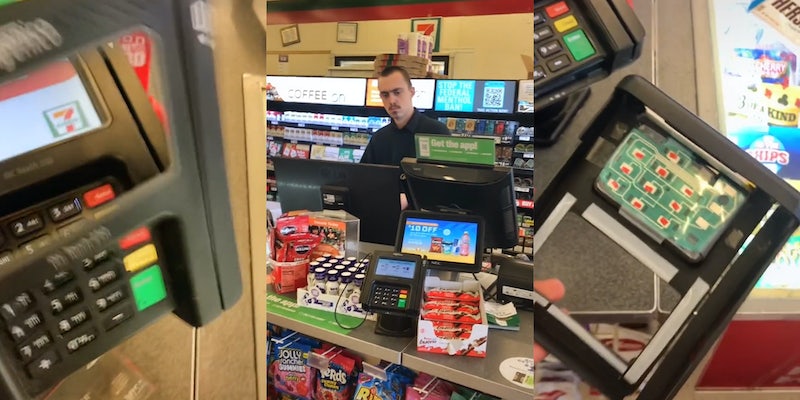 'You guys stole my cash out of my account.'

A user on TikTok went viral this week after allegedly discovering a “card skimming” device on a card machine at 7-Eleven.

A “card skimming” device is “a plastic shell with a keypad overlay that fits over the actual card reader…When you put your card in the device, it reads the card name, number and expiration date, then will send that information wirelessly,” per KDRV.

This is not the first time a 7-Eleven location has been virally accused of having card skimmers on their machines via TikTok.

While the first accusation came from McKinney, Texas, the new accusation comes from a 7-Eleven location in Springfield, Oregon.

This accusation also comes in the wake of further accusations of card skimming at 7-Eleven—such as one instance in the small town of Sweet Home, Oregon, per KDRV, another in Fresno, California, per KMPH, and a another incident in Manchester, New Hampshire, per WMUR.

This alleged card skimmer was found by TikTok user Anna (@portlandandeugene) in a video that now has over 18 million views.

The video shows Anna removing the apparent card skimming device, which is affixed atop the normal card reader.

The camera then points to the cashier, who appears to not see nor acknowledge the situation.

Later, Anna ventured back to the 7-Eleven to confront the cashier.

In this video, Anna starts by saying the local police department told her she was “stealing” by taking the device from the location.

Returning to her follow-up video, when she goes inside the 7-Eleven, she alleges that a second card skimming device has already been removed. This leads her to try to talk with the cashier.

“You guys stole my cash out of my account,” Anna says. Later she continues, “There were skimmers on the machines. I’ve already taken one.”

Throughout the interaction, the cashier stays silent.

Throughout these videos, commenters noted the importance of checking to make sure card machines aren’t tampered with.

“Most gas pumps have tampering stickers, almost always red, around the ‘cracks’ to show if they’ve been opened,” one user shared.

“It’s been a habit of mine to give anything I put my card into a small tug before I pay for like the last 3 years,” another added.

“I used to work at a gas station. And it is our responsibility to constantly check for them, even outside by the pump,” a commenter wrote. “I’ve worked at a gas station for over 5 years now & you’d be surprised, I’m constantly finding them on the pumps.”

Update 11:34am CT, June 13: When reached for comment, a spokesperson for 7-Eleven told the Daily Dot in a statement: “7-Eleven takes incidents involving card skimmers very seriously and took immediate action upon learning of this issue. This has included communicating with stores, operators and associates about the potential threat and working with law enforcement to aid their investigation. We also regularly take preventative action to protect against skimmers, including performing consistent inspections of card readers and keypads across our stores, working with other retailers to learn about incipient threats and continually evaluating new technology for detecting skimming threats. Customers who believe they may be impacted should call 1-800-255-0711.”

Update 6:21am CT, June 14: A Springfield Police Department spokesperson told the Daily Dot via email that “while it is not reflected in the video, immediately after the interaction in our lobby an officer responded, interviewed the complainant, and documented the incident in a police report. The officer then recovered the ‘skimmer’ device and processed it as evidence. The officer then responded to the 7-Eleven location to investigate further and collect additional information for the case.”

The spokesperson added that the department shared the case information with a “law enforcement agency that is investigating similar incidents across the state.”

“We are continuing to work in support of that investigation at this time and it remains open,” they said.

They also offered advice for those who believe they’ve discovered a skimming device. “If a customer does discover a ‘skimming’ device at a business, they should notify the local authorities immediately so an investigation can be initiated and evidence recovered,” they said.

The Daily Dot reached out to Anna via TikTok comment.