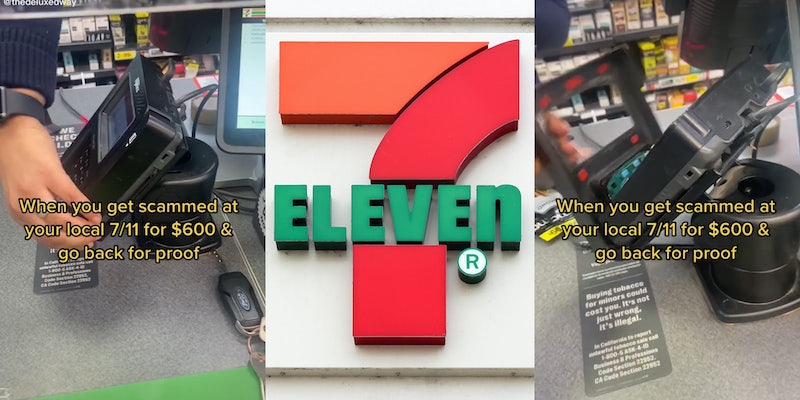 ‘When you got scammed at your local 7-Eleven’: TikToker finds card skimmer after ripping card machine apart in viral video 

'The way she ripped it off you knew she was not playing.'

A TikToker alleged her credit card information was stolen by a rigged machine at a local 7-Eleven.

In a video posted to the platform, user Nyshje (@thedeluxedway) pulls on the front off of a credit card scanner, only to reveal that the front is fake and the inside contains a card skimmer. Card skimmers have the ability to collect card numbers.

Nyshje posted the video just one day ago, and it’s already received over 16 million views.

In a follow-up video, Nyshje tells the full story of how she came to discover the credit card skimmer.

In this video, Nyshje claims that she discovered fraud on her account. After learning of this, she says she remembered an odd transaction that occurred during a recent trip to 7-Eleven. Specifically, she says she recalled the credit card machine malfunctioning and the attendant being very particular about how she used it.

She says she returned to the 7-Eleven to investigate, and sure enough, the machine had been tampered with.

In comments, users commended Nyshje for her deduction skills and for taking direct action.

“He tryna act like it’s not coming off,” laughed one user. “SIR LEMME HELP YOU.”

“The way she ripped it off you knew she was not playing,” another shared.

Others claimed that the employees must have known something was amiss, or were at least overly negligent of the situation.

“I work at a gas station…they’re supposed to be checking the machines daily,” a user wrote. “It’s literally protocol. They’re def in trouble.”

“My question is, how does someone have the time to put that on the card reader with employees right there??” another asked.

Nyshje seems to share this question herself, writing in the caption of her second video, “Y’all think she was in on it?”

According to a report on Local CBS DFW, the card skimmer is now in the hands of McKinney Police detectives, who are attempting to determine its origin and who is at fault. The article also claims that Nyshje’s charges have not yet been reimbursed.