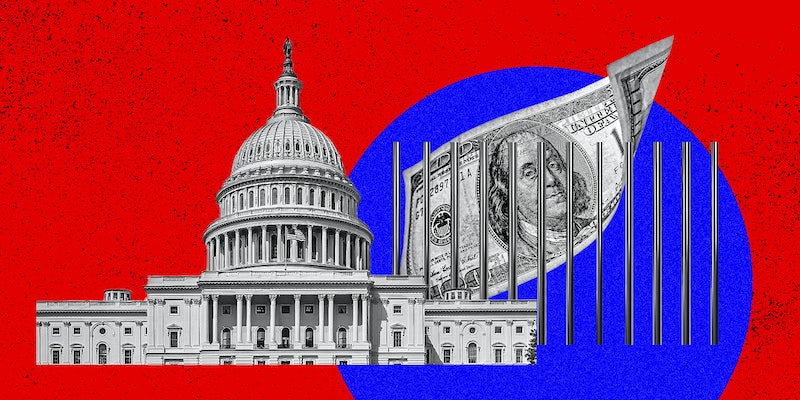 'Defending freedom' has a cost.

More than 700 alleged participants in the Capitol riot are facing criminal charges ranging from petty misdemeanors to serious felonies. At least 100 of them are crowdfunding to pay for their legal defenses and living expenses.

Since the violent mob descended on Congress on Jan. 6, 2021 in the hopes of overturning the election, they’ve raised millions. And they want many millions more.

A Daily Dot analysis of more than 120 fundraisers for accused rioters has found that they’ve raised nearly $3 million to date. Together, they hope to raise $13 million, according to their fundraising goals.

A few haven’t managed to solicit any donations, but the vast majority have been successful—some wildly so. Funds raised range from a few hundred dollars to more than $300,000. Their goals also vary widely, from $10,000 to a half-million dollars. Per the Daily Dot’s analysis, the average sought is more than $100,000; the average collected is $25,000. A few seeking handouts don’t have specific fundraising goals.

In total, the Daily Dot found $2,828,135 in donations to parties who claimed an affiliation with someone charged or facing accusations of being involved in the Capitol riot.

These figures don’t include every single fundraiser for people facing charges from the Capitol riot. The total raised is the highest reported to date, however. In September, CNN reported that the accused had raised $2 million across more than 100 crowdfunding sites.

The accused rioters represent a broad cross-section of Americans of various ages, races, genders, and backgrounds. Beyond their support for former President Donald Trump, they are united by a false belief that the 2020 election was stolen. Most have pled not guilty.

While they are diverse as a body, there are some common themes in both their demographics and how they characterize themselves and the Capitol riot.

The Daily Dot has found that the crowdfunders are overwhelmingly white, male, and profess to be Christian, which is not surprising, given many of the fundraisers are being conducted on Christian fundraising site GiveSendGo.

They characterize the riot as a peaceful protest and themselves as the persecuted.

Capitol police officers were beaten, trampled, maced, and stabbed during the riot. Officer Brian Sicknick died afterward. Their union said that 140 officers suffered physical injuries including concussions, fractured spinal disks, and lacerations. No official tally exists for how many suffer from emotional wounds. Four have died by suicide since the riot. The widow of an officer who fatally shot himself as he was returning to work eight days after the riot told the New York Times that she blames the events of that day for her husband’s death.

To hear the crowdfunders tell it, not one of them touched so much as a hair on an officers’ head. Their characterization of the violent attack portrays Capitol officers as the aggressors and themselves as nonviolent, even heroic. The fundraiser for a defendant charged with assaulting officers and other crimes claims he was attempting to perform CPR on someone who’d gone into cardiac arrest when he was maced by cops.

Defendant Peter Schwartz is accused of taking officers’ pepper spray, turning it on them, and bragging about it in texts. He’s among those who’ve been denied bail. His fundraiser frames the events of that day much differently. “Patriot Pete never imagined that he would witness Federal Police officers beating unarmed, peaceful protestors, and murdering an unarmed peaceful protestor, Roseanne [Boyland], in cold blood by savagely beating her to death with their batons of tyranny.” Videos show that Boyland was trampled to death by the mob as it surged towards the police line.

Even people accused of organizing the events of that day characterize it as a peaceful protest. One of two fundraisers benefiting Joe Biggs, a leader of the Proud Boys, refers to him and his fellow defendants as “non-violent American Patriots.”

One of the GiveSendGo fundraisers benefiting Stop the Steal organizer Ali Alexander similarly insists, “We did nothing wrong on January 6th.”

The fundraisers themselves share other commonalities. Military or law enforcement uniforms are a popular choice for imagery, as are American flags. Photos posing with children, partners, and other family members are another popular choice. A surprising number of fundraisers use photos of themselves at the riot.

An overwhelming number refer to themselves as “patriots” or “political prisoners” and insist they’re being persecuted for their beliefs or for simply supporting Trump, and not for participating in a violent attack on democracy.

Many complain of how they’ve been treated by law enforcement. One complains that in spite of having “no criminal records,” the Federal Bureau of Investigation “pulled a full SWAT raid” to arrest him. Another insists, “As soon as Biden became ‘president,’ the FBI began harassing and oppressing” their family.

Numerous fundraisers continue falsely insisting that the election was stolen.

While incarcerated, the accused allege that guards have beaten them and violated their rights. Their complaints range from gripes about the food—Jacob Chansley, better known as the QAnon Shaman, famously insisted on an organic diet—and how often they’re allowed to bathe, to serious allegations of beatings, being denied lifesaving medical care, and worse.

Richard “Bigo” Barnett, whose picture with his feet propped up on Rep. Nancy Pelosi’s (D-Calif.) desk is among the more recognizable photos from the riot, claims he was “beaten, ridiculed, denied access to medicine, denied access to counsel, and kept in solitary confinement for weeks at a time.” Barnett is facing years in prison for charges including obstructing Congress and violent entry to the Capitol. He’s pled not guilty. To help raise funds for his legal defense, Barnett has also sold photographed pictures of himself inside Pelosi’s office, Arkansas Online reports.

While the veracity of these claims of prison abuse is unknown, United States’ prisons and jails are notorious for human rights abuses.

Some of the most successful fundraisers, those who’ve raised $100,000 or more, aren’t for people whose names are as well-known as the likes of Biggs and Chansley. Oath Keepers who’ve been charged in the riot have raised some of the highest sums. In April, the Daily Dot reported that members of the group had raised more than $500,000.

The largest sum raised that the Daily Dot found was for the Patriot Freedom Project. The group describes itself on Twitter as “dedicated to bringing awareness to the plight of those being politicly persecuted.” It says it provides financial, emotional, and moral support to defendants.

To that end, it’s raised more than $330,000 on its GiveSendGo alone. It also accepts funds through other means, such as PayPal.

The Capitol riot of Jan. 6 is still a flashpoint in the American consciousness. While most see it as a tragic day in United States’ history, many alleged perpetrators still insist that they were in the right.

And they’d like a donation to help them prove it.