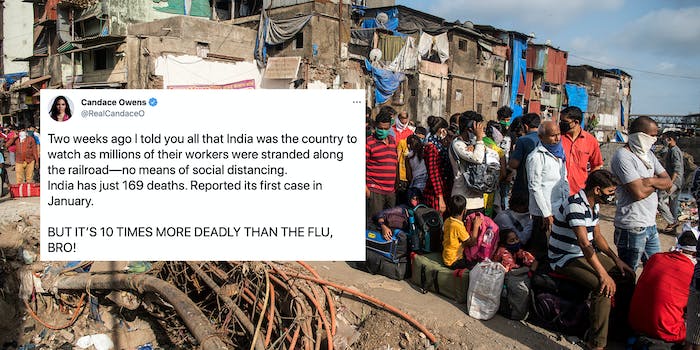 The conservative argued that India had disproven the importance of social distancing.

A prediction made last year by conservative commentator Candace Owens has come back to haunt her as India grapples with a catastrophic second wave of COVID-19.

In April 2020, Owens argued that despite limited social distancing, India was largely unaffected by the pandemic.

“Two weeks ago I told you all that India was the country to watch as millions of their workers were stranded along the railroad—no means of social distancing,” Owens tweeted. “India has just 169 deaths. Reported its first case in January. BUT IT’S 10 TIMES MORE DEADLY THAN THE FLU, BRO!”

Cases started rising in India around February 2021 when the country began reporting around 10,000 infections per day. Since then, the situation has grown progressively worse, with 1 in every 3 cases globally being attributed to India as of last week.

Twitter users were quick to remind Owens of her previous remark.

“A year ago, far-right Trump activist Candace Owens told Indians there was no need to social distance because Covid wasn’t any worse than the flu,” @aravosis said. “Today, Covid has exploded in India, hospitals are overwhelmed, and people are dying.”

India’s healthcare system has been placed under significant strain, leading to shortages not only in hospital beds and oxygen but in medicines and vaccines as well.

Users are also calling on Owens to either delete or provide an update on her tweet.

The explosion in cases, which has also overwhelmed crematoriums and burial grounds, has been blamed on large-scale gatherings throughout the pandemic.

“This is a HISTORICALLY bad take and it makes me so angry that anyone listens to these anti-science, anti-human, pro-death nut jobs,” @BMeiselas added.

Despite the renewed attention on her failed prediction, Owens thus far has not responded.