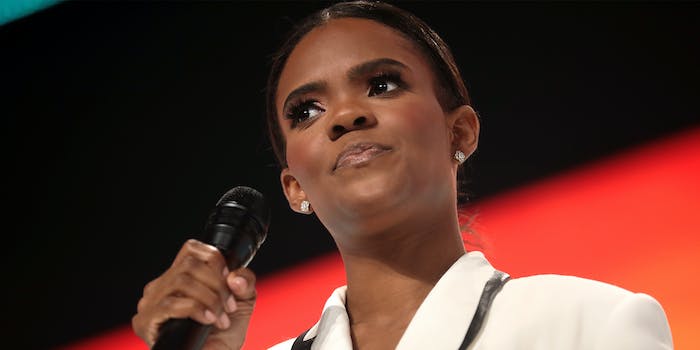 'Seems to me that a private facility is only exercising the same freedom of choice you purport to believe in.'

A private company in Colorado apparently denied Candace Owens, a far-right commentator and fierce critic of vaccines, a COVID test. The company cited her flagrant disregard for the pandemic in its denial, which Owens posted online, along with her response. People are delighting in the email exchange and are pointing out Owens’ hypocrisy.

Owens has been boosted by the far-right as a poster child of conservative ideals for several years now. She made the switch from liberalism to conservatism nearly overnight in 2017 and has since used her platform to promote her distaste for Black Lives Matter, abortion, and feminism.

Due to her abrupt switch in political ideals, paired with her vocal dismissal of the issues facing Black Americans, Owens has become a broadly disliked figure among many online. This resulted in widespread mockery when the 32-year-old shared the email exchange to her Instagram and Twitter accounts, particularly in light of her repeated attempts to treat COVID-19 as little more than “a light chest cold.”

Owens, on a trip to Aspen, apparently attempted to schedule a COVID test. Due to her refusal to get a publicly available and free vaccine, Owens likely has to obtain bi-weekly COVID tests to maintain her lifestyle. Many airlines and public spaces currently require proof of a vaccination, a negative COVID test, or at least the respect of a face mask. Since Owens refuses to mask up or get a vaccine, this probably means she is getting very used to COVID tests.

When she sought a test through a private company in Aspen, however, her request was denied. In an email response to her attempted appointment, the company’s owner appeared to inform Owens the appointment had been canceled. The owner, Suzanna, went on to say that her company “cannot support anyone who has pro-actively worked to make this pandemic worse by spreading misinformation, politicizing and DISCOURAGING the wearing of masks and actively dissuading people from receiving life-saving vaccinations.”

The letter went on to note that the only other Aspen clinic with availability is the “free kiosk by city hall.” It is fully available to Owens, the email noted, but its result times are “inconsistent” due to the need to “mail their tests to Texas.”

Suzanna polished her letter off with a final point for Owens to consider. She noted that “my team and myself have worked overtime, to exhaustion, unpaid and underpaid this past year, spending our own capital to ensure that our community remains protected. It would be unfair to them and to the sacrifices we have all made this year to serve you.”

The story may well have ended there, but Owens chose instead to not only respond to the privately owned company’s decision but also to blast it online. She posted screenshots of the original email, alongside her response, to her social media, likely in hopes of gathering support from her base. What she received instead was widespread ridicule for response, which was seen as immature by many, along with her insistence that Suzanna “clearly isn’t stable enough to work in health and is a danger to the Aspen community.”

After stating that she “never laughed harder” at an email, Owens went on to say that “nothing screams ‘this virus isn’t political’ like Googling the names of the people who book tests with you and determining on a case by case basis whether or not you will let them comply with your community COVID measures.”

She then stated that she believes “the people who work for you must love me,” because no one stopped Suzanna from notifying Owens of her canceled booking. She also seemingly misunderstood Suzanna’s note that her test results would be delayed, due to the only other clinic’s need to send results to Texas, as a claim that no testing sites are available between Aspen and Texas. She polished her response off with a mockery of this misunderstood statement, before simply signing off with “LOL.”

People online immediately pounced on the opportunity to drag Owens. On Reddit, where screenshots of the initial email eventually spread, people proclaimed Owens a “clown” and tore into her for “willingly” posting the emails “thinking she comes out as the victim.”

A number of redditors proclaimed the moment a “self-own,” and praised Suzanna’s email as “the best thing I’ve read all day.”

Owens has a large online platform, and her attempt to publicly blast Suzanna and her company had predictable results. Despite the far-right decrying “cancel culture,” it took no time for Owens fans to locate Suzanna’s company on Google and attempt to review-bomb it. A number of negative reviews have shown up on a business that appears to belong to Suzanna, claiming that the lab is “unprofessional and unethical” for denying “service to people they disagree with.” Some Owens fans even tried to make it into a racial issue—a reversal for anyone who’s seen Owens’ claim that white privilege doesn’t exist.

The attempt to review-bomb Aspen Laboratories isn’t going over well, thanks to a number of newfound Suzanna fans, who took to Google to offset the bad reviews. Numerous recent reviews provide the business with five stars and comments praising it for “relying on facts and science to do their work.”

Owens’ email exchange made its way to Twitter as well, where people are similarly amused by Owens’ attempts to play the victim. A number of commenters have pointed out the hypocrisy in her complaints, with one noting that “I thought you were all for personal responsibility, Candace? A private company held you personally responsible for your actions.”

“You walk around unvaccinated and maskless and you feel entitled to a test,” one of the top comments on Twitter reads. “Yes you have every right to not use a mask or vaccine but don’t expect empathy for your bad decisions, Doctors and Nurses are tired of this mess.”

The Daily Dot reached out to Aspen Laboratories and Candace Owens.