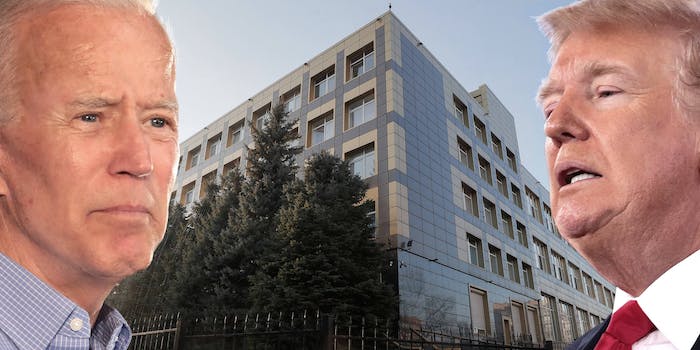 Hackers from the same unit used the same techniques that targeted Clinton and the DNC.

As impeachment played out in the House of Representatives, Russian military hackers were busy with a different, but potentially related matter: hacking the Ukrainian gas company at the center of the inquiry.

The New York Times and other outlets are reporting that beginning in November, Russian hackers successfully targeted Burisma, the gas company that President Donald Trump asked Ukraine to investigate last summer before the U.S. provided its nearly $400 million aid package. The funds were eventually released after a whistleblower lodged a complaint against Trump.

The timing of the hacking has many suspicious that Russia is attempting to help the Trump campaign just as it did in the 2016 election, when it hacked the Hillary Clinton campaign and the Democratic National Committee. Russia later repackaged, leaked, and spread embarrassing details that cast a negative light on the DNC and Clinton.

Russian military intelligence officers from the unit implicated in the hacking were later indicted for election interference as a result of Robert Mueller’s investigation. The same unit is believed responsible for the Burisma hacking, which also reportedly used the same phishing technique.

Trump himself has previously admitted that the Russians helped him win in 2016, though he claimed not to have anything to do with it.

Russia, Russia, Russia! That’s all you heard at the beginning of this Witch Hunt Hoax…And now Russia has disappeared because I had nothing to do with Russia helping me to get elected. It was a crime that didn’t exist. So now the Dems and their partner, the Fake News Media,…..

He later walked that back.

Alongside the most recent Russian hacking, witnesses to Trump’s call with the Ukrainian president were testifying before the House Intelligence Committee about his attempt to coerce the nation to investigate Burisma and former Vice President Joe Biden, along with his son Hunter, who was once on the company’s board. In the call, Trump alleged that the elder Biden used his office to squelch an investigation of the company that could potentially implicate his son. There is as yet no evidence that this is true.

This call is at the heart of the impeachment.

Democrats and a few Republicans, though notably none in Congress, hold that it was an abuse of power for Trump to use the office of the presidency to strong-arm a foreign government into digging up dirt on a political rival.

Before Ukraine could comply, news of the call broke and the White House released the aid.

Experts told the Times that the scope and timing of the Burisma hacking indicates that the Russians were attempting to dig up the very information that Trump wanted Ukraine to obtain. A U.S. security official told the outlet that the Russians are also running a ground game in Ukraine looking for dirt on the Bidens. Some are concerned that if the Russians don’t find anything salacious, they’ll invent it.

A spokeperson for the Biden campaign told the Times, “Donald Trump tried to coerce Ukraine into lying about Joe Biden and a major bipartisan, international anti-corruption victory because he recognized that he can’t beat the vice president.”

The spokesperson added, “Now we know that Vladimir Putin also sees Joe Biden as a threat. Any American president who had not repeatedly encouraged foreign interventions of this kind would immediately condemn this attack on the sovereignty of our elections.”

CNN reporter Marshall Cohen tweeted that this latest twist is, “The 2016 playbook all over again.”

Former FBI assistant director Frank Figliuzzi told MSNBC, “Make no mistake. This is a full-on attack on our 2020 election.”

DNC 2.0. To protect Trump the GRU will manufacture & insert Black propaganda, fake emails in a data base Burisma emails to implicate Biden & support Trump. They don’t care if you believe it … it’s all to get Trump to believe it. He’ll destroy America to win. #NoGreaterTraitor https://t.co/LgZeAwa9fK

Hey White House reporters, try asking your orange buddy if he knew about the Russians hacking Burisma and if he did, why he kept it to himself? Or just keep doing nothing. Up to you.

Hey, @JoeNBC, the biggest risk from Russia's hacking Burisma, is not that they'll discover and disclose damaging information about the Bidens–investigations have shown none such exists–but, as @FrankFigliuzzi1 said, it's that they will PLANT and disclose propaganda about them.

Russians appear to be re-running their 2016 hacking playbook, once again to benefit Donald Trump.

Will the media play along again?

Will the GOP open the door again?

Will the Russians help pick our POTUS again? https://t.co/cfVPcqbY5w

Hardline Trump supporters, among them many conspiracy theorists, have already launched efforts to spin the story. They have yet to settle on a narrative, however. Various options being floated include that the hacking itself is somehow an attempt to hurt Trump’s campaign, rehabilitate Burisma’s reputation, or that it’s irrelevant how or who obtains the proof of Biden being corrupt if such exists.