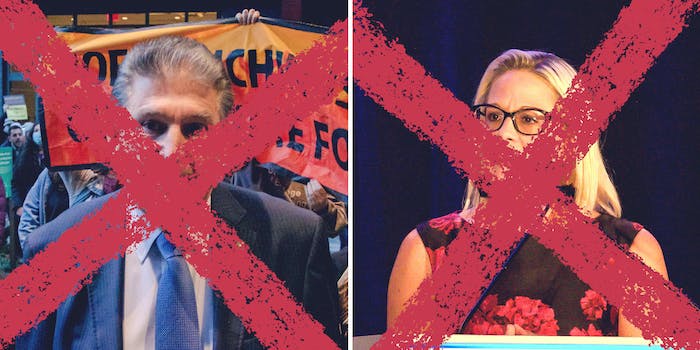 Twitter is already in a froth about Manchin, Sinema blocking Biden’s potential new Supreme Court justice—but they might be wrong

The two centrists are on the hot seat with fellow Democrats.

On Wednesday, news broke that Supreme Court Justice Stephen Breyer is retiring. The internet is already mad at Sens. Kyrsten Sinema (D-Ariz.) and Joe Manchin (D-W.V.) about it.

Sinema and Manchin are widely considered thorns in Democrats’ sides. Last week, they joined Republicans to retain the filibuster, which Democrats have sought to eliminate. They were the only two Democrats who voted to keep the filibuster.

The move is seen as deadly to key pieces of President Joe Biden’s legislative agenda.

Some liberals celebrated when NBC News reported on Wednesday that Justice Breyer will retire at the end of this term. Biden’s low approval rating and historic trends have Democrats nervous that Republicans will regain the Senate majority. If so, it’s unlikely that Republicans will confirm anyone Biden nominates to the Supreme Court.

A Republican-led Senate may not even allow a vote on a possible replacement for Breyer. Sen. Mitch McConnell (R-Ky.) infamously blocked then-President Barack Obama’s nomination to the court in 2016 on the grounds that it was an election year. McConnell had no such qualms when Justice Ruth Bader Ginsburg died near the end of former President Donald Trump’s term.

Because Democrats have a razor-thin majority in the Senate, news of Breyer’s retirement naturally made people think of the two senators considered most likely stand in Biden’s way: Manchin and Sinema.

Some felt that the vacancy would help progressives appreciate the more centrist senators from Arizona and West Virginia.

“If this doesn’t teach left-wingers the value to Democrats of having Joe Manchin and Kyrsten Sinema in the Senate, nothing will,” said one.

A few felt the pair would enjoy what’s perceived as their outsized influence over the process.

Far more were already angry at Manchin and Sinema and predicted that they’ll somehow obstruct Biden’s nomination to the heavily conservative court.

“How are Manchin and Sinema going to f*ck this up?” tweeted @H_MitchellPhoto.

Twitter user @JonathanPerk tweeted, “Wondering how Joe Manchin and Kyrsten Sinema will obstruct their own party in the process of replacing Justice Stephen Breyer.”

But it also seems these qualms are without evidence. A number of reporters pointed out that despite their legislative obstruction, Manchin and Sinema have approved Biden’s other judicial nominees.

After the news broke, White House Press Secretary Jen Psaki tweeted that the administration has “no additional details or information to share” about Breyer’s retirement.