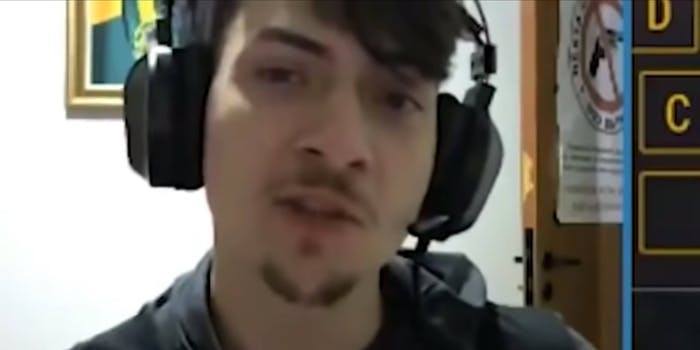 Jair Renan repeated his father's feelings that the coronavirus is 'just a little flu.'

Jair Renan, the youngest son of Brazilian President Jair Bolsonaro was banned from Twitch for actions taking place on his stream on Friday, May 1. During this broadcast, the 22-year-old made homophobic comments as well as made light of the coronavirus pandemic while playing the battle royale game PlayerUnknown’s Battlegrounds.

Renan later went into detail on his ban and revealed that his expulsion from Twitch is permanent.

“I was banned from Twitch forever. It is interesting that the social network maintains profiles that clearly disseminate misandry (hatred, contempt or prejudice against men or boys), but do not support a joke,” wrote Renan.

The Brazilian president has been heavily criticized for his frequent spread of misinformation regarding the coronavirus and the consequences his inaction has had for the entirety of the Brazilian population. Bolsonaro, an outright coronavirus denier, reportedly fired the country’s health minister over disagreements regarding social distancing and continues to host large rallies.

Comments made during Renan’s stream such as that he “would rather die having sex than coughing” and echoing his father’s sentiments that the coronavirus is just “a little flu” indicate that the apple has indeed not fallen far from the tree. Renan also referred to his in-game kills as members of Brazil’s Workers’ Party and mocked people with disabilities by disparagingly using the phrase “one-legged.”

Recently, when questioned by reporters about the record number of daily deaths in Brazil due to the coronavirus, Bolsonaro answered, “So what? What do you want me to do?”

“And? What do you want me to do? I’m a Twitch but I don’t do miracles,” said the parody account in response to Renan decrying his permanent ban.