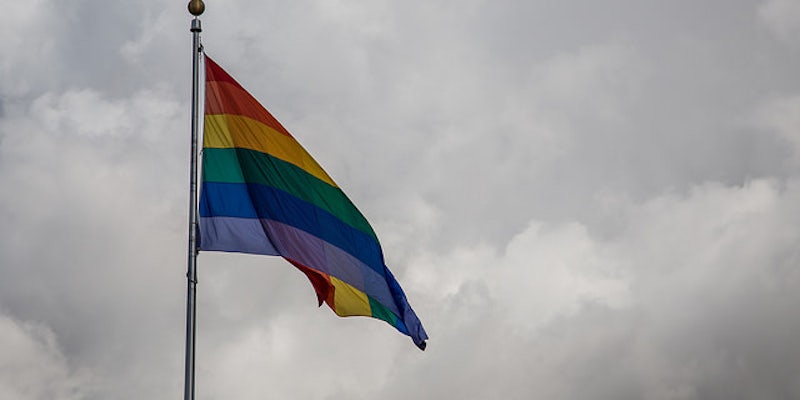 One hateful comment down, a couple thousand to go.

Bob Jones III, chancellor of Greenville, S.C.’s Bob Jones University, has said some pretty dumb things in his day. He defended the school’s since-revoked ban on interracial dating by saying that “God has separated people for His own purpose.” He called Catholicism “the religion of the anti-Christ and a Satanic system.” Most infamously, in 1980, he suggested that our immoral society would improve “post-haste if homosexuals were stoned.”

Now, 35 years later—and three years after an LGBT alumni group petitioned for it via Change.org—Jones has issued an apology for this hate-mongering. Better late than never?

I take personal ownership of this inflammatory rhetoric. This reckless statement was made in the heat of a political controversy 35 years ago. It is antithetical to my theology and my 50 years of preaching a redeeming Christ Who came into the world not to condemn the world, but that the world through Him might be saved. Upon now reading these long-forgotten words, they seem to me as words belonging to a total stranger—were my name not attached. I cannot erase them, but wish I could, because they do not represent the belief of my heart or the content of my preaching. Neither before, nor since, that event in 1980 have I ever advocated the stoning of sinners.

Got that, gays? You’re all still sinners and going to hell, we just don’t have to expedite the process with a public execution. BJUnity, the nonprofit behind the long-ignored petition, accepted the mea culpa, perhaps aware that it was the best they could possibly hope for.

Three years ago, when BJUnity launched our petition, we didn’t imagine we would ever see this day. We are grateful for this apology. We are grateful that Bob Jones III has taken responsibility for these words; words that have caused deep harm for many more people than any of us knows. This means a lot to us because it represents the beginning of a change in the rhetoric and conversation. Once again, we would like to invite Bob Jones III and Steve Pettit to attend our presentation of Matthew Vines at the Greenville County Public Library on Monday evening, where they can also hear from three former BJU students their firsthand experience of the pain from this harsh treatment and we can begin a long awaited process of reconciliation with Bob Jones University. We long for a day when LGBT+ students are as safe as the other students at BJU.

While it may seem grievously delayed, Jones’s change of heart happened in just a tenth of the time it took for the Vatican to apologize for its condemnation of Galileo, so cut him some slack. As for his statement’s lasting impact on fundamentalist Christendom, well, I don’t see how the opinion of some old white dude is going to… wait, what am I even saying.