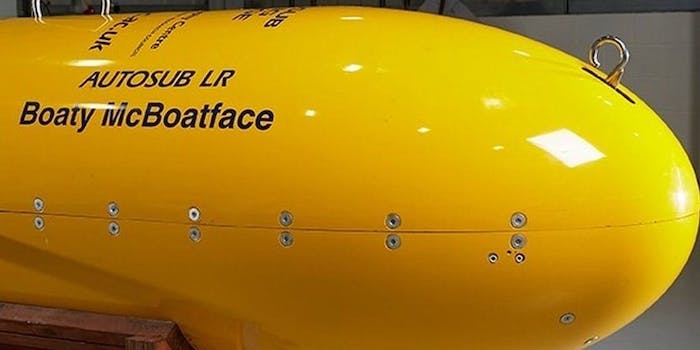 A submarine named Boaty McBoatface will embark upon an Antarctic expedition this Friday.

Boaty McBoatface is perhaps the most gloriously named seafaring vessel of all time, and it’s about to make its inaugural journey.

Boaty McBoatface earned its name from a public poll aimed at naming a new $300 million research vessel in the U.K. Naturally, after more than 124,000 votes, Boaty McBoatface emerged as the winner. It garnered four times as many votes as its second place competitor. Unfortunately, the U.K.’s science minister decided the name was inappropriate, and a robotic submersible got the moniker instead.

The purpose of the yellow submarine (now named Boaty McBoatface) will be to begin mapping the movement of deep ocean waters in the Antarctic. It departs Friday from Punta Arenas, Chile, aboard the RRS James Clark Ross. Then, it will then be dropped into the Orkney Passage, a 3,500 meter (11,483 feet) deep underwater ridge northeast of the Antarctic peninsula. There, the robotic submarine will develop a 3D picture of the state of the passage using onboard instruments, tools deployed from the ship, and instruments attached to the seafloor.

Boaty will be able to measure water flow and turbulence of the abyssal current that flows through the passage. This current plays a major role in the circulation of our planet’s ocean water, but its health is a cause for concern. Scientists believe the Orkney Passage’s bottom-water is warming, which could be bad news for the organisms that survive there, as well as for our rising coastline sea levels.

Boaty McBoatface isn’t the only one of its kind. An Autosub Long Range class of unmanned submersible, Boaty also has two identical, identically named submarine siblings. They will be programmed for slightly different tasks, although exactly what they’ll do and where they’ll go are still being decided.

For more details on the first Boaty McBoatface’s journey into the Antarctic, you can check out the British Antarctic Survey website here.