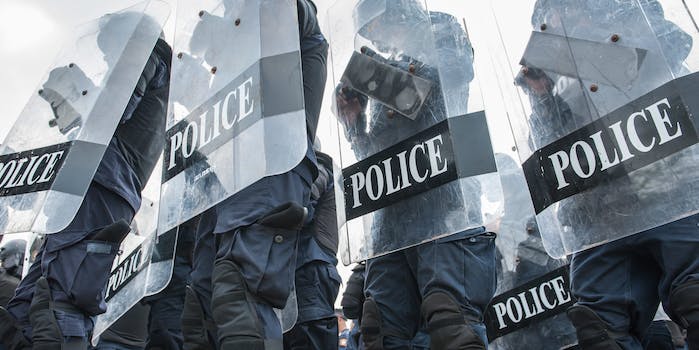 'Your whole program would go down in flames.'

In early September 2017, the Midwest Counterdrug Training Center (MCTC) hosted a course on “narcoterrorism.” By most accounts, it was a helpful few days of lessons on the drug trade and criminal organizations, led by an instructor with years of law enforcement experience.

In surveys, some later praised it as a “wake-up call,” a course with “virtually no room for improvement.”

“The instructor’s strongest points of the course was everything,” lavished one participant.

Of course, there were some complaints. The room was “freezing cold.” Perhaps the instructor could have focused more on terrorism.

And then, there was this: “I don’t know where to start – as someone who has worked full-time counter-terrorism for the past six years, this course was a complete disappointment. The instruction was long on rants and short on any actual substance. Any substantive material was outdated (some of it more than 20 years old). Much of the material taught is publicly available ‘conspiracy’ theory that has been disproved through investigation.”

The respondent continued, “While the instructor was open about his ‘anti-PC’ beliefs – this is the only time I have ever heard the [N-word] repeatedly used by instructors and students.”

The written review ended with a warning to the MCTC leadership.

“This is a time bomb – if anyone were to record [the teacher’s] rants and leak them to the media your whole program would go down in flames.”

While the “teacher’s rants” were not leaked, this response was, as part of the BlueLeaks hack in June. It’s one of the thousands of surveys filled out following MCTC law enforcement training offered throughout the past decade.

Funded by the Department of Defense and administered by the Iowa National Guard Counterdrug Task Force, the Center has trained “over 190,000 local, tribal, state, and federal law enforcement officers, military members, and prevention and treatment professionals,” according to its website.

Survey responders include men and women from states across the Midwest, with positions ranging from military officers to police detectives; narcotics officers to medical professionals. Courses include training for vehicle stops, gang identification, “science-based” drug education, and K9 handling.

While thousands responded favorably these courses over the past 10 years, the negative reviews call into question the culture of the organization, in which instructors saying racial slurs or homophobic jokes would still be rated highly by the majority of survey participants.

Some, including the instructor described above, continued to teach for years, despite being flagged repeatedly. According to additional surveys, the above teacher was still leading MCTC courses as recently as March 2020.

‘Instructor seemed almost proud of being that way‘

Complaints about offensive language and jokes were by far the most common across surveys, coming up consistently over the years. For many, they seemed to reflect, as labeled by one participant, “typical old-style, male-dominated jokes.”

“Something I was debating on even adding to the survey is that the instructor used a lot of sexual jokes,” another responder admitted. “There were also a lot of sexist jokes towards women. At the time, I was the only woman in the class.”

For example, in a 2013 class on statement analysis and interviewing, one instructor allegedly joked, “If a woman is crying, she is lying.”

In 2014, a reviewer likened their organized crime instructor to “Larry The Cable Guy,” due to his “inappropriate racial jokes, sexist jokes, and a barrage of profanity.”

A separate student review of that same instructor noted he “stated that he did not mean to offend people at the beginning of class,” but went on to make, “multiple comments [that] were sexist, racist, or both. Instructor almost seemed proud of being that way.”

Many who wrote about their instructor’s language chose their own words carefully, couching complaints with statements like, “I am usually very good at listening to inappropriate, non-pc things, however…” or, “Sure, we are all cops and should not be overly sensitive, but…”

“Some of the humor could be considered as offensive. (It was not to me),” offered one reviewer after a class on interrogations.

“Asking students if they ‘were the pitcher or catcher’ may be funny to some but is asking for a lawsuit in front of the wrong audience. Asking if they were going to ‘spit or swallow’ was a similar inappropriate question, as well as referring to the black male in the class as ‘brotha’ multiple times when it was obvious he was uncomfortable with it. Joking about sex assault cases is probably not the best idea considering someone may know a victim.””

However, that same instructor came up multiple times in complaints, clearly indicating his “humor” had not changed over the years.

“The instructor was highly unprofessional at times, making inappropriate comments which were generally sexual in nature,” wrote a different student of his, four years later. “The classroom environment was very uncomfortable at times throughout the course.”

Another participant of that course, which focused on interviewing and interrogation, gave more details of those “inappropriate comments,” writing, “The instructor used language that was not appropriate for any classroom.  Asking students if they ‘were the pitcher or catcher’ may be funny to some but is asking for a lawsuit in front of the wrong audience. Asking if they were going to ‘spit or swallow’ was a similar inappropriate question, as well as referring to the black male in the class as ‘brotha’ multiple times when it was obvious he was uncomfortable with it. Joking about sex assault cases is probably not the best idea considering someone may know a victim.”

In a survey on a separate course run by the same instructor, a class member said they were led through sexually themed “games” unrelated to course material at the beginning of each new section.

“Draw a picture of a pig – the length of its tail represents your sexual drive or imagine yourself by a waterfall – three descriptive words are how you feel about sex.”

Another member of that class felt there were “way too many sexual references,” including, “‘You are what you eat,’ ‘I’m going to fuck you like a dog,’ ‘sticking a finger in a child’s vagina.’”

“If a camera was placed in the room he would be on national news for his statements and views. This course was labeled for ‘drugs’ and just about every example referred to sex,” cautioned another reviewer.

Still, surveys from 2019 show that instructor was still brought back for additional courses.

The instructor mentioned at the topic of this article was also identified multiple times over multiple years for additional instances of offensive language.

“Overall I was pretty offended by the amount of times [he] made comments about people in class being ‘gay,’ or ‘homos.’ He also used the word ‘retarded’ and ‘retard’ all the time,” noted a pupil from a course on narcotics investigations, which took place more than a year before the “time bomb” comment.

The spread of biased, outdated, or debunked information was another leading concern. The majority of these complaints were leveled at the same instructors identified above for offensive language.

“Many media sources were slightly outdated and notoriously biased,” wrote one commenter in 2015. “Some of the sources used were blatant political rhetoric.”

“Much of the material taught is publicly available ‘conspiracy’ theory that has been disproved through investigation,” claimed another in 2017.

This seemed particularly common in courses relating to drug studies, such as a 2017 “science-based education” class. A self-described medical    epidemiologist who attended the course offered a lengthy rebuttal to much of what was taught, including the positioning of marijuana as a “gateway drug.”

“That night I emailed him links to at least 1/2 dozen peer review research articles and fact sheets on gateway theory,” the reviewer explained. “The next day in class, his comment on these articles was, ‘I don’t care what the ACLU [American Civil Liberties Union] says. He had not read the fact sheet or he could have seen there were numerous CDC [Center for Disease Control] and NIH [National Institutes of Health] research references. His comment also created the impression that he was not really open to latest evidence based research or perspective that did not align with his beliefs.”

Multiple responders—even those who otherwise ranked the courses favorably—noted a lack of sources outside of Fox News and a lack of examples or trends less than three decades old.

“With the changing behavior in American society, it just looks like there could or should be sources more recent than 1952,” commented a survey responder after a 2018 course on interviewing.

There were also numerous allegations of personal bias being taught as part of law enforcement trainings.

“The instructor, who was nice and professional, pushed his personal agenda on anti-legalization of marijuana,” said one student following a 2016 course on narcotics.

Put more bluntly by another pupil: “His personal bias on the legalization of marijuana was again readily apparent as everyone on drugs was called a ‘doper.’ He never used terms such as ‘user,’ ‘addict,’ or ‘recovering  addict.’ While I am not one to quote the need for, nor the poster child for political correctness, this instructor was disdainful.”

‘You can do whatever the fuck you want’

Others criticized the actual course material and practical law enforcement learnings offered. A 2013 student mentioned their instructor, “suggested [criminal] subjects not be given a break to get a drink and use the restroom after several hours, which may be considered a civil rights violation.”

Following a 2017 course purportedly about “narcotics investigative skills,” one participant criticized the trainer for proposing similar tactics to be used on sexual assault victims.

“If you want to present info on sex assault investigations – look at ‘trauma informed’ approaches. But I suppose the best question is: why is a narcotics investigative skills conference presenting speakers that are commenting on sex assault?”

Numerous comments in this vein referred back to the “reputation of MCTC,” and fears that instructors like these would “degrade” its status or that of other law enforcement departments.

“I found myself embarrassed to admit being part of the National Guard during this class due to instructor’s association with a National Guard affiliated course,” read one 2018 response.

“As a Counterdrug person I was embarrassed that the course had our name on it,” mentioned another.

“If I ever had to testify in court to the amount of training I received in narcotics investigations and if the instructor taught me how to conduct … investigations and act professionally, etc, I could not say he [did] this, and I would say he was a bad example for law enforcement officers and I would recommend officers not act like him,” concluded one reviewer, commenting on one of the instructors still publicly linked to the program.

“He flat out said in class that he lied all the time in court to cover his partner’s asses. He said multiple times a badge and being a cop means ‘you can do whatever the fuck you want.’”